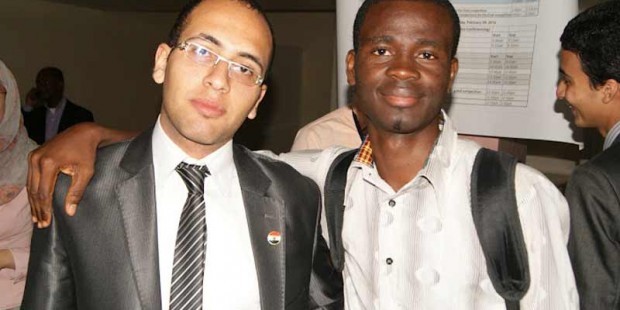 As an AAPG Region, Africa has taken part in the Imperial Barrel Award Programme(IBA) since 2008. It is a global competition organized annually by the American Association of Petroleum Geologists (AAPG), among its Regions and Sections.
Post-graduate geosciences students from around the world are given real-life petroleum industry data which they have to study, interprete, package and present to industry experts as a new ventures project or opportunity. Students of an IBA team act as a New Ventures Group of an operating oil and gas company, assigned the task of making a detailed assessment of the petroleum potential of a newbusiness opportunity, in just eight weeks. They are expected to “think outside the box” and look at new exploration models based on the most recent published research and their given education.

In Egypt in 2011, while protests were going on in Tahrir Square, Cairo University students had to work out of their campus on their personal laptops to get the work done.

Presentations take 25 minutes per team and industry experts and managers give feed-back and select a winner based on the technical quality, clarity and originality of presentation.

Winners are awarded scholarship funds for their geoscience department and derive international recognition and “bragging rights” from winning such a prestigious competition.
No mistake, the programme is rigorous but it also offers rewards to participants – students get a real-life experience in preparation for working in the industry, as well as a chance to travel globally for the different stages of the competition; universities win good money (up to $20,000) if they win, as well as teaching tools in the form of computer hardware and software and industry data, which is often hard to come by because of the generally
proprietary nature of such information. As for the oil companies, they get a feel for the quality of their potential employees and some use it also as a recruitment opportunity.

As an AAPG Region, Africa has taken part in this competition since 2008 with the number of universities taking part jumping from four in 2008 to eighteen in 2012. So far the competition has taken place among 4 countries – Nigeria, Ghana, Egypt and South Africa – with Nigeria winning the regional event in 2008 (FUTA), 2009 (OAU, Ife) and 2010 (OAU, Ife). In 2011 the Egyptians fought back fight and the University of Cairo claimed the regional crown with Alexandria University following in their footsteps in 2012.

Unfortunately, Africa is yet to win the AAPG global IBA competition which takes place among twelve teams representing AAPG’s six regions and six sections.
Whether in the western world or in Africa, students who have taken part in the competition have been very pleased by the experience. They also admit that it is a tasking process. All over Africa, universities cave in to external pressure and pull out mid-way through the competition, as they realize how tough it can become and how much time is required to compete effectively. For those who struggle to hang on, combining regular academic work with the IBA tests the limits of their endurance. In Egypt in 2011, while protests were going on in Tahrir Square, Cairo
University students had to work out of their campus on their personal laptops to get the work done. The Head of Geophysics Department of Nigeria’s Federal University of Technology, Akure (FUTA), Dr. Mary Olowokere
on her part, had to give her personal generator to her students so that they couldwork on their project after hours, since the electricity supply was almost always out.  For the 2012 competition, Egyptian universities were
even more determined. They organized a competition among Egyptian universities and chose their best nine teams to take part in the North Africa semi-final. The best two universities from this semifinal were sent to Lagos, Nigeria to face the rest of the continent. Their hard work paid off with their two schools taking the first (Alexandria University) and third positions (Helwan University). In Nigeria, the schools went through a boot camp to prepare them and brush up on their presentation skills. That also yielded results but the Egytpians had no intention of giving in – the University of Lagos, Nigeria,was in second place.
Getting to the global finals of the IBA competition, which always takes place in the USA presents fresh challenges, most of them related to getting US visas for participating students. From an unrealistic application time of 3 months to applying to US embassies located in other countries, it has never been easy. Often, the Africa region leaders fall back on the AAPG headquarters for assistance in handling the visa issues. In 2011, the African IBA representatives from Cairo applied in Morocco for visas because the US embassy in Cairo was closed during the Mubarak protests.
Twice they journeyed to Casablanca, first to apply and then to present further evidence required by the embassy. They barely made it to the IBA finals in Houston, driving from the airport straight into their presentation, a day after the competition started. In spite of these challenges, the IBA programme is regarded as one of the best training programs in the geosciences, transforming students from inexperienced, wet-behind-the ears learners to confident, mature and ready-to-face-the-world-out there young professionals.

« The East Threatens A Downpour
Nigeria’s Forthcoming Gas Tax: Is the Revolution In Reverse Gear? »