NAPE Gets A Female President-In-Waiting

Adedoja Ojelabi has been elected the President-Elect of the Nigerian Association Of Petroleum Explorationists(NAPE), the largest single body of petroleum geoscientists on the African Continent.

Ojelabi(Mrs.) was elected unopposed at the annual general meeting of the association, in the course of the 30th International Conference, which ended on November 15, 2012.

“I won’t be president until November 2013”, Ojelabi, an earth scientist with Chevron, the American major, declared to well-wishers after the announcement. “I will be Mr Osahon’s Girl Friday until then”. 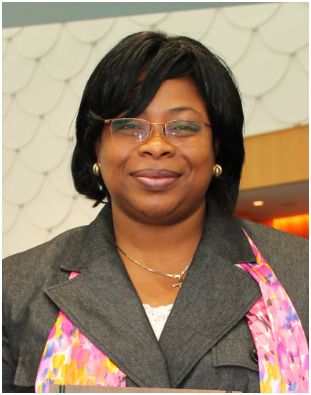 Mrs. Ojelabi’s joke was meant to understate the gravity of her achievement. Still it is fundamental. The President-Elect’s position is of a president in waiting. The No 2 man in the association is the Vice President. But there is something quite important, in spite of this statement. When she sat at breakfast at the Eko Hotel with the new executives of the organization on November 16, it was exactly a month to her 43rd birthday. In November 2013, she will be the association’s youngest president in over a decade, when she takes over the mantle from George Osahon, the former Group General Manager NAPIMS(NNPC), who will run the affairs of the association for the next one year.

Ojelabi’s election suggests that NAPE has decided it will look towards youth for its future leadership. But the data does not match this suggestion. Mr Osahon will be 60 on January 1, 2013. His Vice President, Lere Olopade, will be 54 in 2013. Indeed both, like Ojelabi, have had earlier stints in the executive several years ago and returned. Mr Osahon has been Vice President, Technical Editor and has played several other roles in the association. The current executive committee, meanwhile, is composed of a mixture of young geoscientists with less than 10 years’ experience, and old pros with over two decades in the industry. NAPE’s AGM meetings provide some sort of rough, intelligible barometer for determining who takes the association seriously. It is always filled with greying heads, which means that the association desperately needs to recruit young blood. The argument of those who insist that the body should be run by experienced people however is that institutional memory is important. Indeed, NAPE’s presidency has always see-sawed between the greying heads and the relatively young.

When Akomeno Oteri , then a young geologist with Mobil, formed the association with his peers in 1975 and became its first president, he was barely out of his 20s. There hasn’t been a thirty something year old president since Bayo Akinpelu took the presidency at the age of 38 in 1985, but Layiwola Fatona was president at the age of 44, in 1993. Austin Avuru was president at the age of 47, in 2005, taking over from Gilbert Odior, who was then 48, but he (Avuru)handed over the job to Emmanuel Enu, a professor of earth sciences who was already coasting ahead in the mid fifties. Jide Ojo, who was president before the last president Afe Mayowa, was also in his mid fifties when he ran the association.

Ojelabi’s election, in fact, is a vote for youth and experience. At 43, she has spent 24 years working as a petroleum geoscientist. She joined Chevron(then Gulf Oil Company) as a youth corper, in 1988, when she was 19, with a B. Sc. Geology and Mining from the University of Jos. She actively generated structural maps from seismic data, even as she wasn’t yet an employee. She emerged as one of the two best candidates among the over 60 who were interviewed for employment in 1989, so she just continued her work seamlessly, from youth service to full employment. “The people she hangs out with, her closest colleagues in the industry, are people who are between six and 20 years older than her”, says a petroleum engineer with ExxonMobil who insists on not being named. “So, she’s grounded in the industry lore, even when she’s quite young”.

The NAPE election rounds up a great year for Ojelabi, daughter of a Christian priest and grand niece of Oyin Adejobi, the popular Yoruba folk dramatist and actor. In April 2012, she was honoured with the prestigious Distinguished Service Award by the American Association of Petroleum Geologists (AAPG), for her outstanding leadership and dedicated service to the AAPG and the African Region.

The award was presented to her at the 2012 Annual Conference of the AAPG at Long Beach, California, United States of America, attended by over 5,200 geoscientists. Ojelabi was recognized for “enthusiastically promoting its ideals and recruiting new members.” A particular reference was made to her successful coordination of the Africa Region’s Imperial Barrel Award (IBA) programme which provides a platform for earth science post-graduate students with a unique industry/learning experience and an opportunity to network with future employers. The programme which currently attracts 15 university teams from North, South and West Africa has become globally recognized for its best practices.

« NAPE Elects Eight(8) New Fellows
Advisory: So Much Under One Roof »