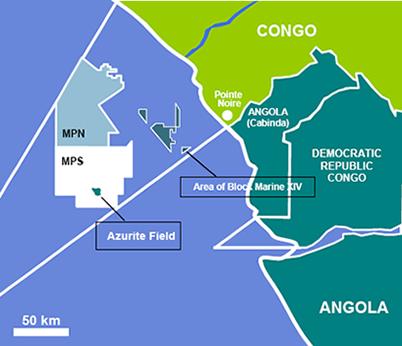 Lower than expected production from the Azurite field,in the Republic of Congo (Brazzaville), has significantly weakened the financial position and flexibility of P. A Resources, the Swedish independent. “The actual production from Azurite during 2012 turned out to be almost 10,000 barrels per day lower than the plan presented in 2010 and the total cash flow since 2010 has been more than $443Million below the plan”, the company declares in a report. “During the past two years it has become evident that the significant investment that was made by PA Resources in the field has generated a considerably lower return than anticipated” –The total investments in the field will most likely not be recovered and the Company has since 2010 written down the book value of the field at two occasions by $219Million and $202 Million respectively. The field, located in the Mer Profonde Sud (MPS) block offshore Congo, just north across the border from Angola’s Cabinda block 14, reached first oil in August 2009, using the industry’s first Floating, Drilling, Production, Storage, and Offloading (FDPSO) vessel. It is operated by Murphy Oil, with 50% interest. P. A Resources holds 35%. “As a consequence of the low production rates and write-downs of the fields’ book value, P. A Resources says, “the Company has received less favorable credit terms and higher costs, and the Company has also breached covenants in the bond loan agreements”. Furthermore, “the Company has been forced to accelerate the amortization of the credit facilities linked to the Azurite field, which has significantly weakened the Company’s financial position and flexibility”.

« With $3.5Billion, ConocoPhillips Cashes Out Of Algeria, Nigeria
China Inc. Buys Another 28,000BOPD Of Nigeria’s Production »