The “Tullow Model” Is Under Siege 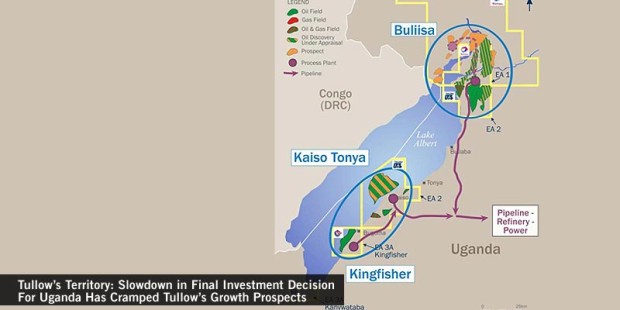 Tullow Oil’s newly cut image of the lead game hunter in the African frontier has come under attack.

“While still a best-in-class explorer”, says UK based Investec Securities, “it has grown increasingly leveraged to the “P” rather than the “E”.

The London listed independent is getting stuck in the exploration wilderness, spending money on vast tracts of underexplored basins even as its production flattens out. Uganda is not coming on stream as quickly as the company hoped as recently as 24 months ago; Ghana hasn’t reached peak production that was promised at on-stream date in December 2010.The company is the operator of the flagship oilfield project in Ghana and the main player in the upcoming production in Uganda.

Elsewhere on the continent, Tullow Oil made the first commercial find in Kenya, has a long list of exploration and appraisal wells in East Africa, holds the largest acreages under licence in Mauritania, and has participated in the promising Sierra Leone-Liberian basin. But its exploration successes are mixed and do not provide enough assurance for the market in the face of its sluggish upward movement in hydrocarbon output which provides the hard cash.

Some analysts “advise” Tullow Oil, with a market cap of $16.5Billion, to “emulate the model of Afren”, a much smaller (market cap $2.6Billion), London based producer. Afren acquires undeveloped discoveries in Nigeria for the purpose of speedy production, and then ensures there are exploration property in its portfolio, in places like Ghana and East Africa, largely for strategic purposes. The key difference is that whereas Tullow lines up assets for both exploratory and development activities, Afren focuses, almost entirely, on field development.

There is fundamental irony here. Tullow grew into reckoning largely by acquiring producing, or ready-to-be-produced, assets. Its takeover of Energy Africa in 2004 (the signal event in its 28 year history)doubled Tullow’s size by giving it ownership of producing fields in Equatorial Guinea, Gabon and Congo Brazzaville. Now that it has moved further upstream to grow some property organically, it is struggling with the balance.

Investec’s latest newletter “highlights a production profile that has slipped materially to the right, a looming capex bill and an exploration portfolio that, while strong, may not have enough depth to offset fresh production disappointments that Tullow”.  The financial analysts say they “estimate a current capex bill (dependent on disposals) in excess of $18Billion out to 2020. As a result, progress on disposals at TEN(an ongoing field development in Ghana) and possibly Uganda is required to help meet its capex commitments which can’t be funded by internal cashflow”.

Investec lists the “troubled ramp up at Ghana’s Jubilee field, delays in Uganda, planned disposals and mixed Exploration and Appraisal results in West Africa(chiefly Ghana, Sierra Leone, Liberia and Cote dIvoire)” and declares that Tullow may not meaningfully maintain production above 100,000BOEPD until 2018. The analyst sees delays across the company’s production portfolio will put upward pressure on Tullow’s net debt and highlight the risk of further slippage to the right.

Incidentally, Exploration successes-even when field development may be quite far way- are as crucial for Tullow Oil as rapid increase in the production profile. “2012 showed just how much Tullow has to do to keep pace with the exploration expectations the market sets for it”.

In other words, Tullow’s challenge is a result of its own success.”Tullow remains the benchmark for London listed explorers in terms of success ratio and its approach to exploration”, Investec says. “Our view is that the market already appreciates this and as a result, Tullow must deliver exceptional Exploration and Appraisal(E&A) results consistently in order to meet the elevated expectations it is set”.

« Tullow Probes The “Ramp” Prospect In Ethiopia
Nigeria: The Marginal Field Experiment At 10 »