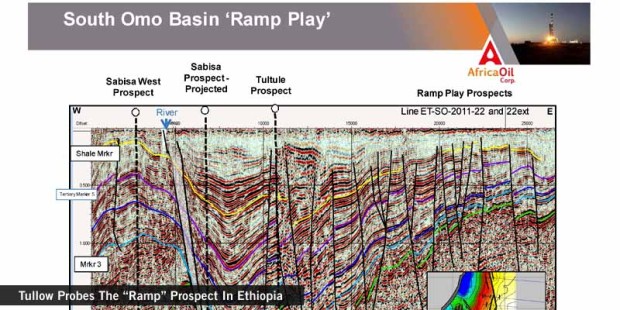 East Africa’s flagship wildcatter, Tullow Oil, was drilling ahead on the Sabisa-1 well in the South Omo Block in Ethiopia on January 23, 2013. The well is located on the ramp structure in the country’s onshore South Omo Basin (see seismic line). Sabisa 1, the first of two exploratory wells on the structure, is expected to take approximately 60 days to reach the planned total depth of 2,600 meters.  The British explorer operates the acreage with 50% and has partners including Africa Oil Corp, with a 30% working interest and Agriterra Limited holding the remaining 20% interest. Marathon Oil Ethiopia has announced a transaction to purchase Agriterra’s interest in the South Omo Block. This transaction is subject to Ethiopian Government approval.

The South Omo Block is located in the northern portion of the Tertiary East African Rift trend where Tullow, has made two important discoveries in the Lokichar Basin of Kenya.  The Sabisa well is located on a similar structural feature as those two discoveries, along a major basinal fault trend.  The basin that this well is located in is slightly younger in age than the Lokichar Basin.  One of the primary goals of this well is to prove that the petroleum system extends to the north which could open up a new sub-basin if successful.  There are numerous prospects and leads on trend with Sabisa.  Partners are currently acquiring 1,000 km of 2D seismic data in the Chew Bahir Basin, located in the eastern portion of the block. Prospects identified from this newly acquired survey could provide future drilling candidates that would test another sub-basin within the Tertiary rift trend.