Gabon, Locked Out, Bangs On The Door

By Fred Akanni, in Libreville

Gabon is hoping to launch a new deep offshore oil licensing round in June 2013, offering licences in its own segment of the pre-salt sequence, which has been imaged by seismic shots that have penetrated layers of sediments deposited during the break-up of the supercontinent in which Africa and South America were joined together.
That supercontinent, named Gondwanaland, included most of the landmasses in today’s Southern Hemisphere, but Africa and South America were particularly tightly knit within that space. The split of Africa/South America, 125 million years ago, resulted in the creation of the south Atlantic. This is why an oil discovery in Brazil could be sometimes seen to be a positive thing for Africa, especially those parts of Africa which were essentially “joined at the hip” with Brazil, when Gondwanaland existed. Those parts include Angola and Gabon. 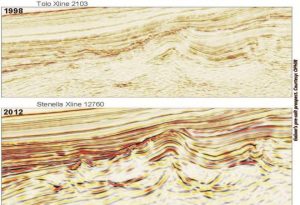 Previous deepwater exploration in Gabon led to four wells drilled in the lower Congo Basin between 2000 and 2002. A TOTAL led consortium came up with three dry holes, located in water depths in excess of 2,000metres to total depths of 4806metres, 4793metres and 4047metres respectively, all very deep wells, in the Astrid Marin acreage. Agip came up dry at a TD of 2,882metres in Powe Marin 1, drilled in water depth of 1,000metres.
In 2005 Amerada Hess, running on adrenalin from its success foray in deepwater Equatorial Guinea, drilled two equally disappointing wells in deep offshore Ogooue Delta.
There have been explanations for the poor results in the Gabonese deepwater segment of the Oogue Delta and the Lower Congo Basins:
• The Ogoeue Delta is not formed by the kind of large sized rivers like the Congo River which birthed the Congo Basin, or the Niger and Benue rivers which created the Niger Delta.
• The part of the lower Congo Basin that is in deepwater Gabon contains the obligatory hydrocarbon source, but it is buried too deep and the apparent lack of structuration disallows the source to adequately charge the reservoirs. Seismic data doesn’t suggest the presence of large scale canyons that could help deliver products of turbiditic flows into the deeper waters. There have been questions about of whether the direction of flow of the Benguela currents, which impact sediment movement on the Nigerian coast for example, could have anything to do with the possible lack of commercial hydrocarbon reservoirs in deepwater Gabon. The jury is still out on that.
Whatever the explanations, Gabonese authorities say they desperately need to shore up production, which has declined from 365,000BOPD in 1995, to 225,000BOPD in 2012.
New data acquired in the last three years by CCGVeritas have shown up the potentials that inhere in testing the presalt sequence, invoking the theory that if Brazil could find massive volumes of oil in the pre-salt deepwater sequence in Tupi(now Lula)-1 well in the Campos Basin, so can wells in Gabon. The survey included more than 9600km of 2D seismic in Gabon’s southern and northern offshore zones, as well as 4,500 sqkm of 3D and 2D data in the southern zone.
Geologists now know that some of the basins on either side of the south Atlantic were formed at the same time during the rift phase and today are mirror images of each other.
Gabonese authorities believe that the country’s deepwater acquatory has never been properly explored.
Gabon had planned a licencing round for 2010, but postponed it in order to complete the promulgation of a new set of regulations. There were also issues of rising drilling costs and environmental concerns after BP’s massive spill in the Gulf of Mexico.
The percentage the national oil company could hold in the newly licensed fields would depend on its financial capacity but would usually be up to 20%. Approximately it’s between 10% and 20% on (a) commercial basis.
The country was producing around 350,000Barrels of Oil Per Day (BOPD), about the highest in its production history, in the mid 1990s, when countries like Nigeria and Angola started witnessing a series of spectacular discoveries in water depths outboard of 750 metres. As Gabon shares the prolific Congo basin with Angola, and was the third largest oil producer in sub-Saharan Africa, it was expected to be part of the game.