In West Africa, The Atlantic Loses Its Sparkle

In deep-water Africa, geology has proven to be a trickster god

The newest deep-water frontiers in West Africa’s exploration rush have not been as forthcoming as the sites of the last major wave of discoveries.

Liberia, Sierra Leone, Namibia and Cote D’Ivoire are the focus of wildcat activities today, the way Nigeria, Angola and Equatorial Guinea were in the mid -90s.

But in the place of the large elephant-sized discoveries of 1994-2004, the Sierra-Leonean Basin, the Abidjan Margin and the Ivorien parts of the Tano basin, have so far delivered mere pimples. 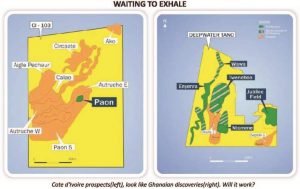 Ghana, which represents the transition between the two waves, has provided the only really big finds, outside of Angola, in West Africa in the last five years.

As far as the elephants are concerned, the locus has shifted to East African deep-water, which is all about gas.

What’s clear so far is that the Cretaceous plays, the target of recent West African probes, have not shown themselves as prolific as the Tertiary, where the ongoing East African deep-water rush has played out.

Note that Nigerian deep-water(The Niger Cone) and Angolan deep-water(The Congo Fan), which dominated the headlines all over the world 10-20 years ago, are Tertiary plays(sediments deposited between 65million and 2.6 million years ago). Which leads us to something: as far as the data in hand suggest, to be big, your deep-water African prospects need to be in the tertiary. But that’s a digression.

“I always knew that the non-Deltaic West African Passive Margin (also known as the West African Transform Margin)is just beginning to be unraveled”, says Ebi Omatsola, Managing Director of the Nigerian independent Conoil Producing and the continent’s leading exploration thinker, warning that it is early days yet. Omatsola had anticipated the basin-opening discovery of Ghana’s Jubilee field as far back as 16 years ago. His prediction, given at a presentation in Accra in 1997, came to fruition 10 years after. Still he doesn’t want to raise expectations about Liberia, Sierra Leone and Cote d’Ivore. “You must understand the geometry of the sand body and other factors to make it work”, he contends.

Tullow Oil, the unfailingly optimistic British explorer, doesn’t sound terribly upbeat about these countries either. It has proven oil and gas condensate system in Sierra Leone and Liberia, it says, but “thick sands only have oil shows(breached traps) and oil bearing sands have low net-to-gross ratio”. The company declares, in its first half 2012 report, that the exploration campaign has found oil but “only satellite class discoveries” have been made to date, whereas, for commerciality, “ hub class discoveries are needed”.

Investec Securities, scrutinizing Tullow Oil’s portfolio, declares that, based on targeted barrels by Tullow, ”the west African transform margin(Kosrou, Mercury, Teak) failed to deliver and so did itsAtlantic (Jaguar and Zaedyus)mirror image play(Jaguar and Zaedyus, in the Carribeans) in 2012”.

Chevron has operated three deep-water acreages off Liberia since September 2010. An August 2012 farm in deal by Eni, the Italian major, into these tracts, signaled that the transform margin was firm on the radar screen of the industry’s majors. But a farm in by one major has meant a farm down by another. With that transaction, Chevron’s operated interest in LB 11, LB12 and LB14 was reduced to 45%, with the Nigerian minnow Oranto holding 30% and Eni has 25%. It’s instructive that Chevron has drilled in Liberia, but is not excited enough to share the results.

The biggest discovery in the Sierra Leone-Liberian basin has been that of African Petroleum Corp. APC, an Australian minor and, perhaps the smallest operator in the province. The company encountered 32 metres of net oil pay in two zones off Liberia with Narina 1, in February 2012.The well reached total depth of 4,850 metres, in water depth of 1, 143metres. Narina-1was the company’s second shot at the Liberian offshore. Its first well, Apalis-1, drilled in September 2011, encountered only minor oil shows.

Lukoil was drilling a well in SL-05-11 Block, off Sierra Leone as of the time of writing this. SL-05-11 is one of the two Sierra Leonean tracts in which the company holds interest. In November 2012, Lukoilacquired a25% stake in the SL-4B-10 block, which adjoins SL-05-11.

Cote d’Ivoire has always appeared more promising than either Sierra Leone or Liberia, in part because some of its most prospective structures are located in the same Tano Basin that has yielded all of Ghana’s big discoveries. Tullow Oil, for one, claims that its discovery well Paon 1(June 2012) was drilled on a sand fairway analogous to the fairways on which the Jubilee field and the TEN(Tweneboa, Enyenra and Ntomme),  cluster wells are located(see illustration).  Tullow and its partners say the well, which encountered 31 metres of net oil sands in one interval, “confirms the Upper Cretaceous fan system present in Ghana extends westward into Côte d’Ivoire and provides significant running room within the CI-103 block” in which it islocated.

The question of how many more Paons are in the fairway and how big they are, will be answered in the campaign that Tullow is leading in 2013.

Lukoil expressed its faith in Cote d’Ivore in October 2012 by converting an exploration licence to a production tract. Block CI-524 represents an eastern part of block CI-401 which Lukoil Overseas has been involved in exploring since 2006. Lukoil holds a 60% interest, PanAtlantichas 30% and state hydrocarbon company PETROCI has 10%. Less than a year earlier, in December 2011, the partners had announced a discovery Independance-1X in Block CI-401. Although the result communicated was that the well penetrated only “eight metres (26 feet) of hydrocarbon pay in good-quality Turonian-aged sand package”, Lukoil beamed that the well was its “most important discovery of the year 2011”.It’s difficult to understand.

What about the “older frontiers”, the site of the first big wave of African deepwater discoveries?

Equatorial Guinea came up with some noteworthy successes in 2012; with Ophir reporting three gas discoveries in its Block R; sizeable enough for the company to contemplate a 1 Train LNG project deliverable by 2017.

There has been no deepwater discovery in Nigeria in the last five years. And no one, as far as we know, plans a wildcat drilling in that country in 2013. Operators are placing a bet on Angola, which has been touting the potentials of the presalt sequence in its Kwanza basin.

Only three wells have been drilled in the “Brazil look-alike” sag basin part of the pre-salt Angola; including the Maersk Azul-1, Cameia-1 discovery & Cameia-2 appraisal, and the PetrobrasOgonga dry hole.  This means that there have been only two discoveries, which can so far be described as encouraging “teasers” but it will take much more drilling to really know what is going on. My worry is that the Kwanza Basin is in the cretaceous. If the pre-Salt in Angola turns out to yield huge discoveries of elephant-size, I’d start looking positively on cretaceous basins again.

« The Indian Ocean Keeps Bubbling, By Sully Manope, in Maputo
The Promise of Deepwater Dahomey Basin »