Is Ghana Stuck At Tano Basin?

Since commercial production commenced with the deepwater Jubilee field in December 2010, Ghana has ranked prominently on the hydrocarbon map of the world.
It looks likely to record average 2013 production in excess of a hundred thousand barrels of crude oil per day as Jubilee ramps up to peak of 120,000BOPD.
But all the current production, planned production and drilling successes are clustered around the Tano Basin and its sub-basin: the Cape Three Points.
Any step out of the Tano, into another basin has so far resulted in failure.
The UK listed Afren Corp., has felt the full brunt. Barely six months after it acquired 68% interest in Keta Block on the Accra Keta basin, Afren spudded Cuda 1. It came out unsuccessful.
The company beamed with optimism after the failure, saying that the block, located farther east, towards the Ghanaian border with the Republic of Togo, had both Tertiary and Cretaceous prospectivity, with the principal exploration focus being the Cretaceous Albian to Campanian sections. “The block offers multiple prospects and leads, with a variety of trapping and depositional settings. A number of these show potential for significant stratigraphic trapping and giant field potential”, Afren enthuses on its website. In 2011, Afren farmed out 35% participating interest and operatorship to Italian major Eni, who in turn drilled a well within a year of buying in.
Eni’s well, Nunya-1X(formerly named Cuda 2) was a spectacular failure. It didn’t encounter a drop of hydrocarbon and more, it gave the lie to Afren’s claims that Cuda-1 would have encountered oil if it had drilled deeper.
Apart from the Afren/Eni adventure in Keta, there hasn’t been drilling on any other basin outside the Tano. The Saltpond basin still delivers trickles (less than 500BOPD) through the Saltpond filed. Operators have not ventured to drill in the deepwater Saltpond/Central Basin, which is the country’s third prominent deepwater basin.
Still, who cares whether these other basins deliver, as long as there’s continuing success in the Tano Basin?
A field development plan of a 100,000BOPD(peak) has been submitted to government.
The Plan Of Development (POD) looks to bring together a cluster of fields collectively named TEN(Twenoba, Enyenra and Ntomme).
Another such cluster of fields, the MTAB(Mahogany, Teak, Akasa and Banda) is in pre-development plan stage and is expected to deliver 100,000BOPD at peak.
Both projects, located in Deepwater Tano/Cape Three Points Blocks, envisage the crude to be produced through an FPSO each. 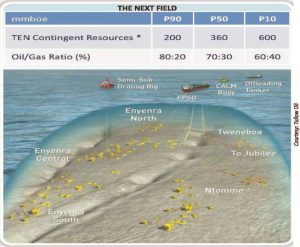 They are also, both, being operated by the British explorer Tullow Oil, with partners including American independents Anadarko and Kosmos Energy.
Meanwhile, Eni, which has failed in Accra Keita, announced a successful find in the Offshore Cape Three Points(OCTP), in the Tano Basin early in 2012, testing 5,000BOPD of “high quality oil” from a gross oil column of 76metres.
And Hess Corp, reported, in 2012, its fifth discovery in Deepwater Tano-Cape Three Points License. The company reported that Pecan 1 follows the previously reported discoveries at Almond (16metres net oil pay), Beech (44metres net oil pay), Hickory North (30 metres net gas-condensate pay), and Paradise (37metres net oil pay and 90 metres net gas-condensate pay). Ghana has had a good five years, since the discovery of Jubilee(2007-2012) in terms of overall oilfield activity relating to both the drillbit and the commercial playground: almost as soon as Tullow Oil announced the discovery of the Twenoboa held, proving that the deepwater oil tank extends beyond Jubilee, news filtered in about ExxonMohil s interest in acquiring Kosmos Energy’s stake in Jubilee for $4billion. The reputation of the putative buyer and the amount of money on the table heightened the perception of profitability of the overall Ghanaian portfolio. But beyond the Deepwater Tano and Cape Three Points blocks and adjacent acreages, what other acreages can be prospective enough to interest any company? The Tano Basin itself was a grave yard of hopes just 15 years ago, until Kosmos, Anadarko and Tullow started re-interpreting the data differently from earlier explorers. Kosmos itself described the Tano Basin as a bad address only six years ago.

« Gabon, Locked Out, Bangs On The Door
The Indian Ocean Keeps Bubbling, By Sully Manope, in Maputo »