The Myth Of Uganda’s 2Billion Barrels 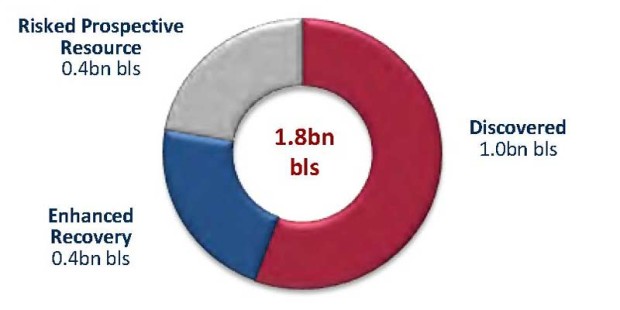 One of the most widely circulated “rumours” on the oil patch is that Uganda holds Two Billion Barrels of estimated recoverable reserves. In the business media,  journalists, analysts, even CEOs of E&P companies, state without blinking that “Uganda has 2Billion Barrels of Oil reserves”. It’s a magic figure.

But Tullow Oil, the flagship operator in Uganda and all of East Africa, has never come out explicitly to give a figure to the country’s  “estimated recoverable reserves”, which is 1P reserves.

The closest the company has done, of recent, to make an explicit statement on Uganda’s volume of producible hydrocarbon was to publish a wheel (see illustration) in which it indicates that it has discovered a billion barrels. But any petroleum economist will tell you that you can’t recover all of the oil you discover.

We sounded out two very respected geologists, who have also been conversant with petroleum economics for upwards of 55years collectively.

The simplest interpretation of Tullow’s wheel, according to Austin Avuru, Petroleum Geologist and CEO of Seplat, the largest African owned independent E&P company, is as follows:

Tullow never gave any figure for 1P (Proven)reserves, which is the closest in terms of certainty about what you can recover from the ground. But almost everyone else is going about saying that Uganda has two billion barrels, as if those two billion can be entirely extracted with current technology.

“Discovered resource is well  understood, says Bayo Akinpelu, former Exploration Manager at Chevron Nigeria. “It is what you estimate you have found – no more! , It is usually internal to the estimator and does not have any bearing on what may be developed or Invested in”. Mr Akinpelu warns of the “sacredness” of the term “reserve” which heexclaims, is “used loosely by all!” Simply put, “it is the estimated quantity of hydrocarbon (lists criteria for determining the presence and certainty of flow)  that can reasonably be produced from an investment that is certain to go on”. The key to this, he elaborates, “is investment that is certain to go on!”

Tullow Oil and its partners have submitted a plan of developing the resource to the Ugandan government as far back as June 2012. Tullow says, in its 2012 report, released February 13, 2013, that discussions were ongoing. Mr Akinpelu cautions about talking about “reserves” when a project hasn’t been sanctioned.  “You need note that it is the New York Securities and Exchange Commission (SEC) which determines reserves, and  not geeky geologists and engineers!” The role of the geologists and engineers is to assure that the accumulation is there in certain quantity and extent and is very likely to ultimately produce a volume that a capital investment in it will be economical and profitable. “The p50, p90(P2and P1) you referred to  refers to the certainty or confidence of the technical team that it is there and it will flow. Unlike in the past when we defined this certainty as proven, probably and possible, p5(3P), p50 and p90 simply expresses this in probabilistic language that can be more easily incorporated into computer modeling”.

« Who Is Drilling What And Where In 2013?
Can Chevron Close The Gap On TOTAL in Angola? »