The Nigerian SPE occupies a large space in the global organization. “SPE operates in 123 countries in the world, with a global membership of about 103,000. It also has a total 187 sections and 238 university chapters”, Igiehon 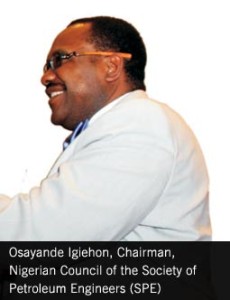 says. “Of this, SPE Nigeria has a membership of about 5500, five sections and 25 university chapters. So, SPE Nigeria comprises between 5 – 10% of SPE International dependent on the aspect you are considering”.

Still, Africa is the flavour of the month. The continent’s hydrocarbon property places it in sharp relief onthe radar screens of the world’s leading oil producers. The most exciting discoveries of natural gashavetaken place on this part of the globe in the last three years. SPE Nigeria’s  annual internationalconference for the year, scheduled for August 2013, is primed to examine how these opportunitiescanbe maximized.

“The 2013 conference aims to provide a veritable platform for the examination and discussion of what it will take to achieve Africa’s oil and gas production growth ambitions”, Igiehon explains. The conference theme which, he says “is taking a holistic view of the key enablers that will ensure success, namely “required policy, funding, technology techniques and capabilities” also has in its frame, the recent new entrants into the club of oil and gas producing nations in Africa. “This way, the 2013 NAICE  aims to provide a pan-African platform for professionals and organisations to network and exchange experiences and ideas to help in the attainment of the individual state and regional production growth objectives”.

Igiehon contends that “the conference has a technical focus, with capacity building and exchange of ideas as a core objective, so participation is not only sought at the level of the highly placed government officials. Participation from the executives, professionals and student cadre is also a key drive”.

It wouldn’t be the first time that an SPE Nigeria conference would have a Pan African focus. As trends in the global petroleum industry have been key determinants of the organisation’s yearly themes, the African focus has shown up in the seasons that Africa catches the world’s attention. It’s not sheer coincidence that a Pan African Theme was chosen for the 2002 conference.  After all,  2002 was a year that featured a large swath of West African deepwater assets coming to first oil. The theme in that year was “The Technological Challenges in Maximising Exploration and Production in West and Southern Africa Sub- Regions”.

Igiehon reiterates that “SPE is a global organization with mission to disseminate technical know-how and related technologies in the fields of oil and gas exploration and production”. And SPE Nigeria, being part of this international body, “is part of this global mission” .

The 2013 conference will be the  37th edition of SPE Nigeria’s Annual International Conference & Exhibition (NAICE).  “Many past conferences have delegates from other African countries e.g Ghana, Congo,……

“Over the years, we have invited participation from the Government, Companies and Universities in the other oil producing African countries, sometimes with encouraging results”, says Chairman Igiehon.  “At the 2010 conference, the Minister of Petroleum of the Republic of Congo sent two representatives to attend the conference. I have to be honest that one challenge we have faced is that of language, with a number of countries’ official languages being French, Portuguese and so on”.

This notwithstanding, participation still be invited from the other oil and gas producing countries in Africa including namely Ghana, Uganda, Congo, Gabon,  Congo, Ghana, Angola …….

There is so much anxiety in Nigeria-at least outside the government ranks- about the impact of Shale Gas and other Unconventional fossil fuels on the Nigerian economy. The SPE seems to share these anxieties, which is why it’s the key theme of discussion at the Oloibiri Lecture, the SPE’s signature annual policy roundtable. We ask Igiehon what he personally thought of the issue.

“The emergence of unconventional hydrocarbon resources, especially gas, is a significant factor in the global energy demand – supply equation”, responds the ranking reservoir engineer with Shell. “The potential size of this resource is of the magnitude requires a deeper consideration of the short, medium and long term impact it could have  on Nigeria oil and gas industry. This is of particular importance, given our position as the 6th largest crude oil exporter and 14th largest Natural gas exporter in the world, on which about 95% of our foreign exchange earnings and about  80% of our budgetary revenues are derived.

“In the early release (reference case) of USA’s  Energy Intelligence Agency’s 2013 Annual Energy Outlook, a sharp rise in domestic crude oil production from tight oil play over the next decades is forecasted. Further, dry natural gas production is projected to increase, mostly from unconventional plays (tight sand and shales), such that by 2020, domestic production will outpace consumption by 2020, thereby spurring net export of gas. There are other scenarios of this forecast that predict earlier or later cutover from net importer to net exporter.

“On 20th February 2013, the website of Platts’ Oilgram (a leading global energy, petrochemicals and metals information provider) carried a story with headline that ‘Nigeria’s LNG exports to US in steep decline on rise of shale: NNPC’. It quoted an NNPC report that stated that ‘In 2011, Nigeria’s LNG export to the US represented 1% of total LNG exports to that country, compared with about 12% in 2007.’ Further, it quoted the report saying that  ‘However, the new NNPC data projects Nigeria’s LNG exports to shrink further given the steadyincrease in shale gas’ share of total US gas supply from 8% in 2007 to 32% in 2011 and to the US becoming a net exporter of natural gas this year’.

Igiehon says that “these reports go to highlight the growing importance of unconventional hydrocarbons and potential impacts on the global oil and gas supply and demand dynamics. It is therefore incumbent on Nigeria to reflect on this situation and fashion out strategies to protect its industry, its market and income”.

In choosing this topic for the Oloibiri lecture series, the chairman argues, “SPE Nigeria is providing a robust platform to bring this issue to fore, for the Government and Industry players to get informed  and deliberate on the way forward”.

The phenomenom certainly has its potential upsides for the Nigerian Petroleum Engineer, Igiehon admits. “Indeed, the emergence and potential of unconventional hydrocarbons opens up new vistas for the oil and gas industry, and infact for the world, as we are likely to be able to tap into resources which were hitherto evaluated to be unproducible . This hydrocarbon source will potentially play a significant role in bridging the future demand – supply gaps forecasted in some global energy scenarios.Globally,  and especially in the countries where there sizeable unconventional resource discovered and/ or in production, new skill sets and work opportunities have opened up for Petroleum Engineers.However, noting that the unconventional resource base in Nigeria is not yet been actively developed, these opportunities are not currently available in-country”.

Apart from the Oloibiri Lecture, SPE Nigeria’s  2013 Calendar includes  a ‘Catch ‘em young “ essay and quiz competition, Nigerian Students Technical Conference as well as monthly technical sessions by SPE chapters…And yet the perception remains that the three day conference constitutes over 70% of SPE Nigeria’s activity. We ask Igiehon how his leadership intends to change that.

“Indeed, with the growth, success and visibility recorded by the conference NAICE since inception, it has eclipsed all the other less-visible activities of SPE Nigeria Council and the five SPE Sections in Nigeria (Abuja, Benin, Lagos, Port Harcourt and Warri). We do a lot more that the conference, but we have not talked about this sufficiently with our membership, our partnering organisations/ companies , the oil and gas community and the general public. One way we want to change this is to increase the publicity  of our other  activities and the contribution and highlight the impact these activities are having in our workplaces, our universities, our secondary and primary schools; all making differentiating contribution to the building the capacity of the workforce that is needed to manage one of the most important sectors in the Nigeria economy.

“Today, we have four flagship events. The first is the annual Oloibiri lecture and Energy Forum, which is positioned as a policy level event to discuss pertinent and emerging issues that affect Nigeria Oil and Gas Industry. Secondly, we actually have three conferences, the first being the well- known NAICE, then wealso have the Young Professionals conference and the Students conference. The conferences are positioned as technical events where knowhow and technologies are discussed, shared and exhibited”.

We want to round up the conversation and we thought it was important to bring this up: Is the Nigerian Petroleum Engineer adequately involved in running the Nigerian Oil and Gas Industry?

“The involvement of the Nigerian Petroleum Engineer in running the Nigeria Oil and Gas industry has increased steadily over the years”, remarks Igiehon, “and has been enabled by the Nigerian Content Act and the active uptake of this initiative by the industry. Today, the demographics of the Nigerian working in the industry is more favourable than in the past, the number of indigenous service companies and operating companies are on the rise. Overall, onshore operations today is largely indigenized given that it’s more matured and technology transfer is well advanced.Here too, I do not think we have reached the goal, but the journey is well on its way and steady progress being made.

Mr. Igiehon has mixed feelings about whetherthe Marginal Field awards have helped Nigerian Petroleum engineers develop skills to work in the industry and take charge. “The marginal field programme was visionary in intent but post-award implementation has been challenging. Ten years after the fields were awarded, seven of the 24 fields are on production. This provides food for thought, for all stakeholders to consider the learning points, with a view to closing the gap with expectation, both for the first set of fields awarded and for future programmes. My overall stance is one of expectation of further improvement, noting the successes so far recorded has proved the concept”.