Nigerian independent, Waltersmith Petroman, is evaluating the feasibility of installing a 5,000 BOPD refinery on its Ibigwe field in the eastern Niger Delta basin. The refinery, it hopes, “will provide an alternative income stream especially in the wake of very frequent disruption in export schedules caused by the vandalisation of pipelines in the Niger Delta”, the company said in a statement.

When it comes on stream, the mini-refinery will produce Diesel, Jet Fuel, Kerosene and Naptha. Waltersmith’s Executive Chairman, Abdurazaq Isa, says his company has spent over $200,000.00 on the studies, largely payment to Chemex LLC, the Bakersfield, California, U.S based company which constructed the topping plant at 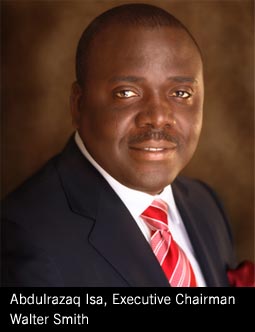 “The reports they(Chemex) submitted indicate that the economics are favourable” Isa explains, “but we are doing our own due diligence”.

In the last 15 years, Nigeria’s four, government- owned refineries have only been able to deliver barely 20% of the 52Million litres per day of Petroleum products they were designed to supply, according to the report by a task force that the Government set up in mid- 2012. This supply gap has been bridged over the years from imports, to the extent that in 2011 as much as 76% of aggregate demand was imported. “Further analysis of the 2011 supply gap with respect to each of the products clearly shows that import dependence factors for AGO, DPK and PMS are 31%, 55% and 86% respectively”, says the report. “By implication Nigeria is almost totally dependent on imports for PMS”, the report said.

Waltersmith currently produces 4,000BOPD from the Ibigwe field, which was awarded to it as a marginal field by the Nigerian government in 2003. The field was brought back on stream in 2008 with an early production facility consisting a storage tank and separators. In December 2012, the company completed the upgrade and commissioning of the 15,000 BOPD flow station was completed in 2012. This involved the installation of Low and High Pressure Separators, an additional Gas Compressor, Oily Water Treater and Expedition Pumps.