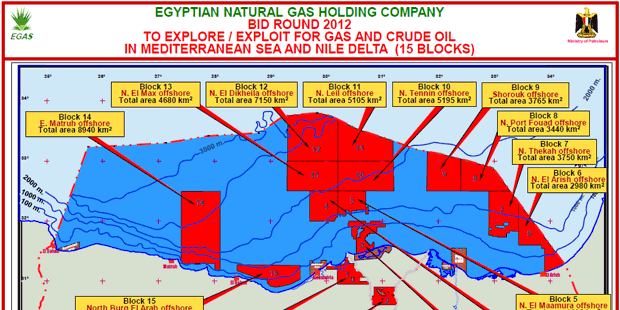 15 Exploration blocks in the Mediterranean Sea and Nile Delta Basins were put on auction on June 4th 2012. Bid round closing date was February 13, 2013, at 12.Noon.

It will be Sea Dragon’s first operated asset in the country(it’s currently involved in other assets as a non operator). The company says the “South Disouq concession is on trend with the prolific Abu Madi accumulations to the north which contain both the giant Abu Madi gas field, with over 3TCF of original gas in place, and the offshore Mediterranean Baltim fields”. It is “also in the same area of the Nile Delta where there had previous success discovering the large El Wastani field with over 500BCF of original gas in place”.

All three companies have been active in Egypt for years, with ENI the oldest tenant, having been in the country since 1954.