The company is challenging Tullow Oil’s carefully constructed image of the lead game hunter in the African frontier, asking stockholders to sell the explorer’s shares. “While still a best-in-class explorer”, says the UK based Investec, Tullow “has grown increasingly leveraged to the “P” rather than the “E” side of its portfolio”. 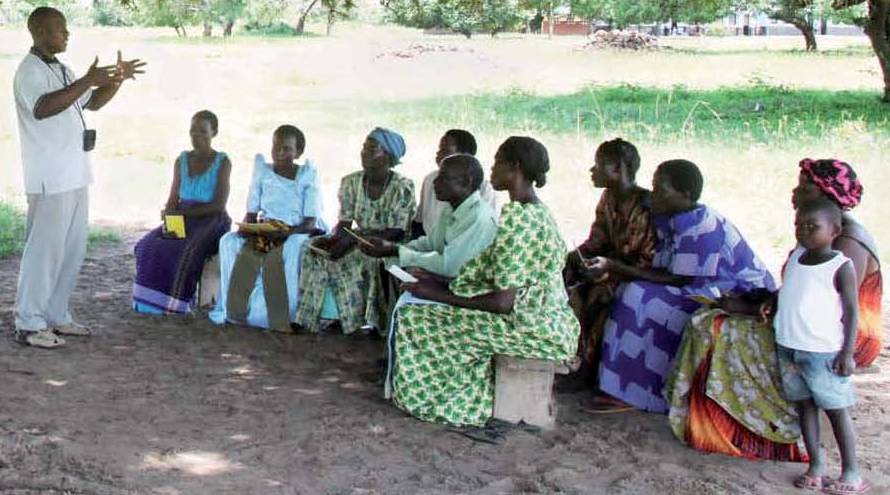 Tullow engages a community in Uganda: getting to production here has been a long, hard slog

The London listed independent is getting stuck in the exploration wilderness, spending money on vast tracts of underexplored basins even as its production flattens out. Uganda is not coming on stream as quickly as the company hoped as far back as 24 months ago; Ghana hasn’t reached peak production that was promised at on-stream date in December 2010.The company is the operator of the flagship oilfield project in Ghana and the main player in the upcoming production in Uganda. Still, Investec’s views do not necessarily jell with everyone else’s opinion. “Three research analysts have rated the stock with a sell rating, six have assigned a hold rating and twelve have assigned a buy rating to the company. Tullow Oil has a consensus rating of Hold”, the Mideast Times reported on April 30, 2013.

On the bright side,Tullow Oil made the first commercial find in Kenya in 2012, has a long list of exploration and appraisal wells in East Africa, holds the largest acreages under licence in Mauritania, and has participated in the promising Sierra Leone-Liberian basin. The Ghanaian government has given approval for the Plan of Development of the Tweneboa-Enyenra-Ntomme“TEN” cluster of fields, which is now expected to deliver first oil in 2016, with a plateau production rate of 80,000 barrels of oil per day. Future development of gas resources at TEN is anticipated following the commencement of oil startup.  In Kenya, Tullow tested 2,312BOPD in three levels in Twiga South-1, the second discovery in the country. In Uganda, the uncertainty over the size of the refinery to accompany the 200,000BOPD developmenthas been cleared, with President Museveni agreeing to Tullow’s suggestion of  30,000BOPD refinery, alongside the export of crude.

But the exploration successes are mixed and, in the view of Investec, do not provide enough assurance for the market in the face of its sluggish upward movement in hydrocarbon output which provides the hard cash.The two other wells drilled in Kenya and Ethiopia (Paipai-1 and Sabisa_1)haven’t delivered clearly successful results. Ivory Coast keeps coming up with disappointing results and Tullow’s work in the Equatorial segment of South American basins, particularly in French Guiana haven’t been a commercial success.

Investec  highlights “a production profile that has slipped materially to the right, a looming capex bill and an exploration portfolio that, while strong, may not have enough depth to offset fresh production disappointments that Tullow”. The financial analysts say they “estimate a current capex bill (dependent on disposals) in excess of $18Billion out to 2020. As a result, progress on disposals at TEN field and possibly Uganda is required to help meet its capex commitments which can’t be funded by internal cashflow”.

While Tullow and partners are cheering the Ghanaian Government’s approval of TEN, Investec reminds everyone that the 2016 first oil date simply means that the2ndHalf 2015-for-first-oil worst case scenario, suggested in late 2012, has even slipped.

Tullow insists its strength is more about its ability to pick the right exploration targets. “Our exploration-led growth is enabled by our financial strength, which has been significantly enhanced over recent years”, says CEO Aidan Heavey. “We have increased our operational cash flow from production and while we are not a production-driven business per se, it is a key component of the cash flow required to finance a major exploration programme”. Heavey explains that portfolio management is another rich source of funding opportunity for the business. “As part of our ongoing activity, we will sell or reduce our interest in assets at different points in the value curve to either increase the rate of return on investment from our portfolio or to use the proceeds to recycle cash and maintain capital efficiency”.

To which Investec responds that the portfolio management is not robust. While progress may have been made onthe decision regarding the size of the Ugandan refinery, there still had not been a government approval for the field development, as of June 12, 2013 and this reinforces misgivings about first oil date. “The 2016 first oil target is slipping to a broader 2017-2018 range”, Investec says, arguing that it sees “delays over pipeline routes as a key risk”.

Even if Tullow completes the sale of its Asian assets and Southern North Sea assets in 2013(contributing ~23,000BOEPD), Tullow would still be very challenged.Investec also thinks thatTullow’s admission that the remaining resources to southeast of Jubilee in West Cape Three Points (WCTP) are unlikely to be developed as a standalone project but instead be brought back through the Jubilee FPSO, adds to the odds stacked against Tullow.

Some analysts “advise” Tullow Oil, with a market cap of $16.5Billion, to “emulate the model of Afren”, a much smaller (market cap $2.12Billion), London based producer. Afren acquires undeveloped discoveries, mainly in Nigeria for the purpose of speedy production, and then ensures there are exploration property in its portfolio, in places like Ghana and East Africa, largely for strategic purposes. The key difference is that whereas Tullow lines up assets for both exploratory and development activities, Afren focuses almost entirely, on field development.

There is fundamental irony here. Tullow grew into reckoning largely by acquiring producing, or ready-to-be-produced, assets. Its takeover of Energy Africa in 2004 (the signal event in its 28 year history)doubledTullow’s size by giving it ownership of producing fields in Equatorial Guinea, Gabon and Congo Brazzaville. Now that it has moved further upstream to grow some property organically, it is struggling with the balance.

Investec declares that Tullow may not meaningfully maintain production above 100,000BOEPD until 2018. The analyst sees delays across the company’s production portfolio will put upward pressure on Tullow’s net debt

Tullow argues that financial results in line with market expectations and balance sheet substantially strengthened through debt re-financing and $2.9bn from Uganda farm-down. But the company itself admitted, in the Half year 2012 report, that the Net Income that wasup by 63%, due to the farm down, was “offset by increased exploration write-offs”

Incidentally, Exploration successes-even when field development may be quite far way- are as crucial for Tullow Oil as rapid increase in the production profile. “2012 showed just how much Tullow has to do to keep pace with the exploration expectations the market sets for it”.

In other words, Tullow’s challenge is a result of its own success.”Tullow remains the benchmark for London listed explorers in terms of success ratio and its approach to exploration”, Investec says. “Our view is that the market already appreciates this and as a result, Tullow must deliver exceptional Exploration and Appraisal(E&A) results consistently in order to meet the elevated expectations it is set”.