With the sacking of Augustine Olorunsola, the minister has seen out three Directors of DPR and three Group Managing Directors of NNPC in her three years on the job.

No one in the room, at the Lagoon Restaurant on Wednesday June 19, 2013, had the inkling that George Abiodun Osahon had been offered the top job at theDepartment of Petroleum Resources (DPR), the industry regulator.He had given the vote of thanks at the monthly technical meeting of the Nigerian Association of Petroleum Explorationists (NAPE), the influential, 7000 member grouping of earth scientists, of which he is President. He had arrived unusually late to the ritual and there were whispers in the room about a certain note of gaiety in his voice, even some bounce in his gait, but it was hardly anything you couldn’t ascribe to just having a good day. 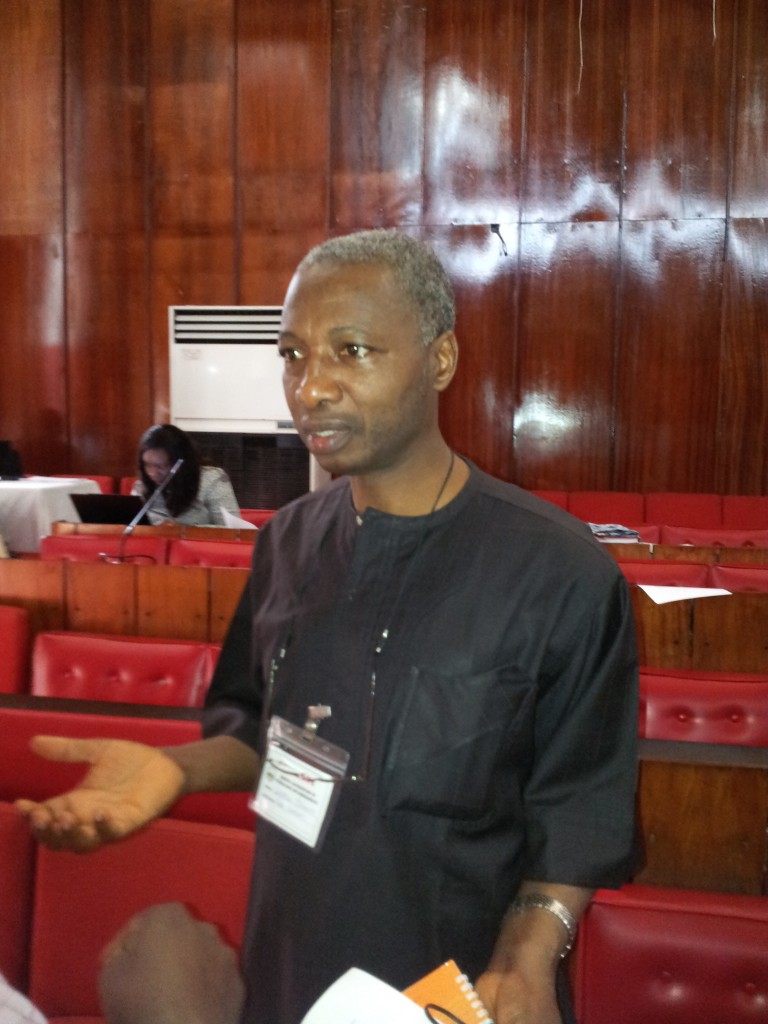 Osahon: I didn’t beg for the job. Photo by Toyin Akinosho

Across the street from the Lagoon restaurant stands the grey, 10 storey building housing the headquarter offices of the DPR. Here, on Thursday, June 201, 2013, Augustine Olorunsola rounded up his work with a short address to the staff of the department. He had been the third man to do the job in the space of 40 months. His had been, like his last three predecessors, a brief stint.

Days later, he was gracious enough to respond to a question from Africa Oil+Gas Report.  “I thank God for the opportunity to serve for 19 months and finishing unblemished”, he remarked. “He that orders my steps will lead me aright”.

It had been quite a rough 19 months for Olorunsola, who had left a high profile job at Shell, the Anglo Dutch major, at terribly short notice, to take up the position of DPR director. He was Vice President Gas and Power for the corporation’s Subsaharan African operations. It is important to background this: Shell is, as I write, a net producer of gas. The company, in late 2012, started to produce more gas than oil around the world. Subsaharan Africa has provided some of the major projects (the 1Bcf/d Gbaran Ubie project for one) in that transition, so anyone who was at Olorunsola’s position, in 2011, was a key point person in Shell worldwide.

When we met in late December 2011, at a send forth party for him, on the lawns of the Ikoyi residence of Mutiu Sunmonu, chair of the corporation’s Nigerian subsidiaries, Olorunsola was ecstatic about the challenges ahead. At a personal level, he saw it as something to give him a rounded industry experience. “I have tackled commercial issues, I have been part of policy making, now I have the chance to help regulate”, he said. “Regulatory issues are what Nigeria desperately needs to get a handle on”.

He was aware of the political minefield, having been strategic adviser to Odein Ajumogobia, Umaru Yar’adua’s minister of state for petroleum, between 2008 and 2009. “When I left my job at Shell it was clear to me what I would do at DPR, even if all I spend is one year”, he disclosed, over vintage white wine and grilled chicken.

And what a ‘year’ it was! At the time he took the DPR job, Olorunsola was superintending a committee that overhauled the version of the Petroleum Industry Bill that was drafted in the Yar’adua era. He was considered as part of a close circle of select heads to who the minister- Diezani Allison-Madueke turned when she needed to solve a policy problem. By having him named head of DPR, some argued, she was only formalizing that relationship. He was considered an advocate of the formation of a Petroleum Inspectorate in the ministry, an independent agency which should, apart from being a regulatory clearing house, also serve as an intellectual resource centre for the minister.

But that was exactly where the problem started. When Olorunsola’s committee turned in its draft of the PIB, the minister was aghast. The provision to transform the DPR into an independent Petroleum Inspectorate Commission, whose Director would be as independent from the Petroleum Ministry as the Central Bank Governor is from the Finance Ministry, was not in the minister’s interest. The minister also wanted the key agencies of government in the industry, including NAPALM and the Downstream companies to be largely under the ministry’s control. The Olorunsola committee didn’t oblige. Mrs Allison-Madueke handed over the draft to another committee which then came up with a draft that has largely been interpreted, owing to the sweeping powers it granted to the minister, as “Madam Diezani’s PIB”.

The minister began distancing herself from Olorunsola and he was no longer, for her, the go-to- guy for policy explanations. He stopped being an intellectual sounding board. He wasn’t one of those that wrote her speeches any more.

It was clear, by April 2012, that Olorunsola would be fired. So why didn’t he simply turn in his letter of retirement? Why didn’t such a big man, steeped in industry lore, experienced in global oil industry affairs, just travel to London and start consulting? You have to worry about all of us, the 500,000 Nigerians who earn more than 400,000Naira a month. There’s so much anxiety about our present and our future. We haven’t succeeded in collectively building a country that has space for all of our aspirations, so when we get to our late 50s, we just cling on to anything, any insult. Perhaps I am wrong. There’s time for Mr. Olorunsola to tell his own side of the story in the future. Perhaps he’d give us the opportunity to publish it. Perhaps there are more insidious things we don’t know. How wrong was he himself? What’s clear is that he was not relieved of his post for corruption charges or ethical lapse. But that is a digression. Impeccable sources at the Ministry in Abuja say that now that the Minister has finally made up her mind to launch awaited bid round of hydrocarbon properties, she doesn’t want Olorunsola to superintend the sale. She finally did what she had decided as far back as a year ago; move to relieve him of the job.

Should Mr. Osahon have taken over Olorunsola’s job?

His first response to Africa Oil+Gas Report is that he was called to serve and this was different from “scrambling for the job”. To which he then added that he had “no choice but to listen to the voice of reason and the concern of the people”. The interpretation of this is that he had consulted widely, when he was offered the job. Perhaps those he had consulted told him he had the opportunity to make a difference.

Most of the congratulatory messages speak to an overall confidence in the ability of Mr. Osahon to deliver. “Our country will benefit from his very deep technical experience and in particular his thorough understanding of the oil and gas industry”, says Afe Mayowa, a former president of NAPE. “This does not come to us as a surprise because of his visible track record in the industry”, echoes Kareem Folorunso, manager of Swamp Assets at the Nigerian Petroleum Development Company (NPDC), a subsidiary of the NNPC. Concurs Adeola James, who is NAPE’s assistant secretary and an earth scientist at NPDC: “He is a very sound technocrat, seasoned administrator and a very humble man to work with it.  With him at the helm of affairs in DPR, it is a new era for NPDC, the leading national E&P in Nigeria”.

Mr Adeola’s comments are contestable. How can the Director of DPR, the way the organization is presently constructed, affect the fortunes of an E&P company like NPDC, which is government owned? Who determines the destiny of NPDC?

There’s convergence in the congratulatory messages: Mr. Osahon, 60, has been around the industry. He has been Group General Manager of NAPIMS, the quasi regulatory and commercial subsidiary of the NNPC, through which the state hydrocarbon company interfaces with the major oil companies who produce over 85% of the country’s oil and gas. He had been Managing Director of the NPDC, which has been promoted by Allison-Madueke as the now and future cash cow of the NNPC. He had been General Manager for the National Content Division (NCD) of the NNPC. He has been part of most of the committees around policy overhaul, policy drafting, and policy implementation in the industry.

In spite of his skills, Osahon has a self-effacing attitude and some believe that the Minister, in appointing him to take over from Olorunsola(who is surprisingly equally low key), would get him to do more of her bidding, than she was able to make Olorunsola do. “He’s going to surprise her”, says Sam Ojibua, an energy analyst in Lagos. “He’s not confrontational, but he simply may just not do things her way.” Is this as important as his being able to sit and face the job of regulation without having to be at the minister’s beck and call?

Some are genuinely worried about how Osahon could keep on being appointed to these positions, in spite of his many private interests: (in marginal field operatorship, in consulting for a wide range of companies), “but I guess, at the point we are in this country, there are no pretences about any ethics anymore”, argues a key player in the Power sector.

That’s quite an important point, but Osahon may argue that he has resigned, or taken a back seat from all the jobs/interest/deals he has been involved in, so he can be an unbiased regulator. But the point is, the director of DPR, in Minister Diezani Allison Madueke’s book, is not a regulator, he is a staff of her office.  How does anyone make a difference in this job? Half the time, you’d be in Abuja, (The DPR is the only arm of the ministry whose headquarters are located in Lagos) just hanging around to see the Minister; another quarter of the time, you are suddenly called upon to clarify some issues in person. When Austin Oniwon was fired from the job of Group Managing Director of the NNPC, in early July 2012, he had lasted only 25 months on the job. He was entitled to have retired in August 2011, but was asked to stay on, by the minister. His dismissal, along with all but two members of his eight man board of directors, was meant, “to further strengthen the ongoing reforms and transformation of Nigeria’s Petroleum sector”, according to a statement from the Nigerian Presidency, “and in furtherance of efforts to achieve greater transparency and accountability in government”.

Oniwon’s ouster came in the midst of a raucous national conversation over corruption allegations regarding the probe set up by the country’s lower house of legislature, to investigate the massive fraud, running into $4Billion, over subsidy on petroleum products. But the size of the fraud did not come anywhere close to this figure until the minister came to the office. Still, subsidy probe or not, the ouster fits the pattern of dismissals of a succession of Group Managing Directors of the NNPC, in a manner that suggests little respect for the occupant of the seat.

When Oniwon himself took over from Shehu Ladan, in June 2010, he became the sixth man to occupy the position in the space of 11 years. Mr Ladan’s own predecessor, Mohammed Barkindo, ran the corporation for only 13 months. These three rapid successions happened under Minister Allison Madueke’s watch.

In Obasanjo’s entire eight years in power, there were only two GMDs of NNPC; Jackson Giaus Obaseki and Funso Kupolokun. Each served for the four years of each of the former President’s two terms.

“With the sacking of Osten Olorunsola andthe appointment of George Osahon”, notes one hardboiled cynic, “Diezani Allison Madueke, Goodluck Jonathan’s minister of petroleum, has achieved what she wants: two Personal Assistants masquerading as Chief Executives of her ministry’s key parastatals”.

That’s quite a harsh statement, but with the data in hand, it is closer to the truth than any of the rousing congratulatory messages cluttering the email inbox of George Abiodun Osahon.