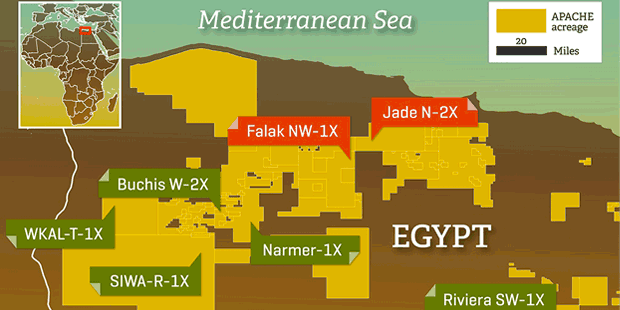 Apache Corporation has reported seven oil and gas discoveries in four different geologic basins and six different concessions, south of the Meditteranean sea in Egypt’s onshore Western Desert. All seven finds have been tested and Riviera SW-1X is already producing, the company reported in a statement.

The biggest discovery of the lot(so far) — the Riviera SW-1X on the southern flank of the Abu Gharadig Basin — test-flowed 5,800 barrels of oil and 2.8 million cubic feet (MMcf) of gas per day from a Lower Bahariya sand with 24 feet of net pay.

These seven finds “are located basins and acreages highlight the geologic and geographic diversity across the company’s 9.7 million gross acres” says Thomas M. Maher, Egypt Region vice president and general manager. “The Faghur Basin yielded four of the discoveries with one each in the Shushan, Matruh and Abu Gharadig basins “

Apache explains that the Riviera SW-1X, located in the WD 30 Development Lease acquired in 2010, is 1.3 miles south of the Riviera field, which also produces from the Upper Bahariya and Abu Roash formations. The discovery extends the known southern limit of the play in the Abu Gharadig Basin. “The well is currently online and producing at restricted rates of 2,000 barrels of oil per day while gas rates continue to be monitored. Drilling and completion costs for the well were $5 million. Apache has a 100 percent contractor interest in the WD 30 Development Lease”.

The Narmer-1X and the Neilos field are elements of an emerging Paleozoic play pioneered in the Western Desert by Apache, the company claims. The Narmer-1X, located in the Faghur Basin and the Khalda Offset Concession, encountered 85 feet of net pay in Paleozoic-aged  sandstone and test-flowed approximately 1,200 barrels of oil and 400 thousand cubic feet (Mcf) of gas per day with a trace of water. “Although appraisal wells will be required to accurately map this new field, the stratigraphic trap is estimated to exceed 1,000 acres with analogous prospects mapped nearby. With its proximity to existing infrastructure, the well is expected to be put on production quickly following development lease approval”.  Drilling costs for Narmer-1X were $3.1 million, with completion pending. Apache has a 100 percent contractor interest in the Khalda Offset Concession.

The Jade N-2X, located 1.5 miles to the northeast of the Jade field in the western Matruh Basin within the Matruh Development Lease, encountered 35 feet of net pay in the Cretaceous-aged Alam El Buieb 3G sandstone. The zone was perforated and tested over a 74-foot interval, producing up to 146 barrels of condensate and 11.2 MMcf of gas per day at original reservoir pressure. Apache has a 100 percent contractor interest in the Matruh Concession. Drilling and completion costs for the well were $2.6 million.

The WKAL-T-1X, located 3.5 miles due south of the nearest production in the Tell field within the West Kalabsha Concession in theFaghur Basin, logged a total of 32 feet of net pay in the Safa formation. The well was tested in one of three zones of Upper Safa sandstone that flowed 2,900 barrels of oil and 2.8 MMcf of gas per day. Drilling and completion costs for the well were $5 million.

Also in the West Kalabsha Concession, the WKAL-N-3X appraisal well successfully extended the WKAL-N field to the west. The well flowed on test at a rate of approximately 3,500 barrels of oil and 3.2 MMcf of gas per day from the Safa Formation.

Development lease applications have been submitted to the Egyptian General Petroleum Company (EGPC) for both of these future producers. Apache has a 100 percent contractor interest in the West Kalabsha Concession.

The SIWA-R-1X, located in the Siwa Concession in the Faghur Basin, tested 1,900 barrels of oil per day from the Safa sandstone. The well encountered 73 feet of net pay with the lowest known oil corresponding to the mapped structural closure. This discovery is 3.5 miles south of the nearest production and is expected to be put on production immediately following EGPC approval of a development lease. The discovery extends the southern limits of the productive fairway and is one of a number of analogous structures expected to be tested. Drilling costs for the well were $4.8 million with final completion pending. Apache is the operator and has a 50 percent contractor interest in the Siwa Concession with the state-owned Tharwa Petroleum Company holding the remaining 50 percent contractor interest.

The Buchis W-2X was drilled in the Buchis Development Lease on the northeastern margin of the Faghur Basin. The well tested a three-way closure adjacent and up-thrown to the Pepi oil field with multiple Cretaceous, Jurassic and Paleozoic objectives. The Buchis W-2X encountered 44 feet of stacked pay in the Cretaceous-aged Alam El Buieb formation and additional pay in the Paleozoic-aged Zeitoun and Basur formations. The well tested approximately 1,700 barrels of oil per day from the AEB-3D sandstone. Drilling costs for the well were $4.7 million with $400,000 estimated for completion. Apache has a 100 percent contractor interest in the Buchis Development Lease.

The Falak NW-1X, drilled in the Khalda Development Lease on the northern flanks of the Shushan Basin, logged 114 feet of stacked net pay in the Safa sandstone. Apache tested 1,200 barrels of oil and 6.1 MMcf of gas per day from multiple Safa sands. A completion string is currently being run in the well. Falak NW-1X is three miles south of the Shams field and two miles southeast of the recent Amoun NE-1X discovery. Drilling costs for the Falak NW-1X were $3.5 million with $1 million estimated for completion.