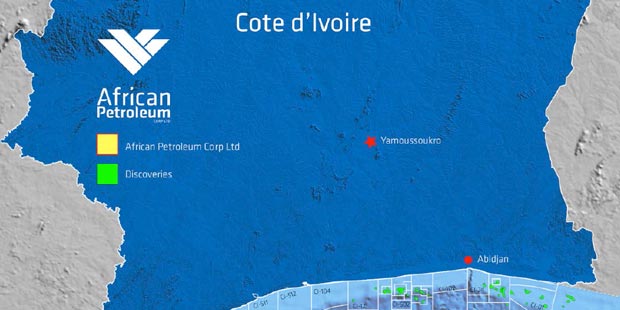 African Petroleum, the Australian minnow which operates the assets, says that “final angle-stacks have been received for both CI-513 (May 2013) and CI-509 (June 2013), allowing for prospects to be matured further”. The company enthuses that the 3D “seismic data shows encouraging submarine fan leads and prospects over Blocks CI-513 and CI-509 and has confirmed the presence of major turbidite fan systems”.

In its second quarter press statement, AP claims that the Competent Persons’ Report by The ERC Equipoise includes volumes and risks for five prospects. The Company currently plans to drill one well on each Block, ‘Ayame’ in CI-513 and ‘Leraba’ in CI-509, during the second half of 2014.

A P says that acquisition and processing of the 3D seismic data over a third acreage, Block CI-508, is being completed on behalf of Vitol E&P and co-venturers, “subject to a cost sharing agreement.”