The Charmed Life Of The Explorer’s Explorer 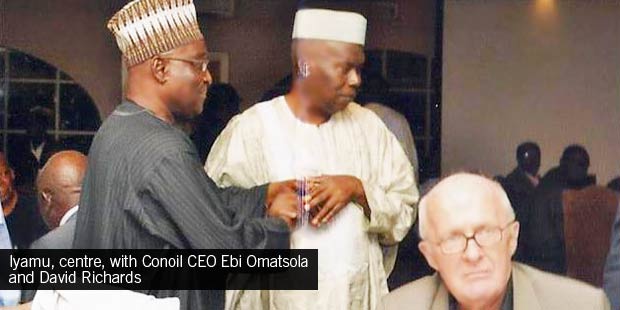 Eddie Iyamu was the authentic hero, a true Nigerian original
By Toyin Akinosho

“I nearly fell off my chair the day he told me at our Tinubu office that he had just resigned his top Exploration Manager job at Shell”, Samuel Oluwole Ariyo recalls, again and again.

He tells this personal story all the time, and every new recall is told with more excitement.

The man in the tale is Eddie Iyamu, the first Nigerian to be made Exploration Manager at Shell, and the first homegrown geoscientist to reach that position in any oil major operating in the country.

The meeting happened thirty years ago, in a spacious room, located in a three storey building, across the road from the old Central Bank headquarters. “I was still looking forward to that type of seat in my own company”, Ariyo explains. “Amidst the shock his palpably strong determination to succeed impressed me greatly. We had a long discussion on the way forward”.EDDIE IYAMU, A BIO
Edward Ekuase ‘Kamerun’ Iyamu  (nick name ‘Kamerun’ as the young man was ‘made’ in the Cameroon where his father worked, then for the African Timber Company) was born on the 12th of June, 1936, in Benin City, the first of ten children of  the late Mr & Mrs Iyamu of Oza quarters, Benin City, in the Midwest of Nigeria.

His primary education started at the United Native African School, Benin and later moved on with his parents to Sapele, then a growing commercial city in the heart of the Niger Delta basin, where he completed his primary school education.
He attended the well-known Edo College, Benin City, between 1951 and 1955, passing the Cambridge School Certificate Examination in Grade 1, alongside twelve others out of a student population of 26.

Starting his professional career as a Trainee Seismologist with the Shell BP Petroleum Limited in 1962, Mr. Iyamu was elected as a Member of the Institute of Geophysics, London in 1965 and in 1966 he became Party Chief for Shell’s Swamp Crew.
Five years after graduation, in 1967 he married beautiful Miss Esther Osazuwa of Agbado Quarters, Benin City. The marriage is blessed with several children and grandchildren.

In 1968, Eddie became Assistant Seismic Supervisor, SPDC Western Division, Warri and thereafter, he moved on to Data Interpretation in Lagos. Between 1972- 1974, Eddie went on cross-posting to Shell Brunei as Seismic Interpreter and returned to Nigeria in 1975 as Senior Geophysicist.
In 1977 he became Chief Geophysicist, a landmark attainment in those days, and three years later, he was appointed to the exalted position of Exploration Manager.
Iyamu passed away on July 22, 2013. The recollections above were weaved together from a sort of web conference.
&nbsp

This bio was read as a citation when Iyamu received a distinguished Honorary Award of the Nigerian Association of Petroleum Explorationists (NAPE), IN 2012.

A year later, in 1984, Iyamu combined with Alex Okoli, a Shell colleague known industry-wide at that time as a versatile seismic Interpreter, to establish the pioneer exploration and production consulting outfit, Geotrex Systems Limited, long before the advent of the local content initiative. The two of them pulled in Layi Fatona, a young, technically honed sedimentologist, again from Shell.

By the time I joined Chevron as a trainee geologist in July 1988, Geotrex had become a legendary subsurface consulting company and the troika was considered a bespoke group of earth scientists all around this segment of the oil patch.

“Geotrex became the quintessential training ground for young geoscientists and engineers with most of them earning masters and doctorate degrees on the bill of the company”, according to a 2012 citation by the Nigerian Association of Petroleum Explorationists (NAPE).

“It was a challenge for us in the early days to recommend to Management that Geotrex could do it”, Ariyo says. Such was the terrain that Geotrex leaped into; Nigerians were not supposed to know enough to be technical consultants, advising Multinationals on why a well should be drilled where.

Ariyo got his dream job of Exploration manager in Gulf Oil Company, (now Chevron) a few years after that meeting with Iyamu in his Tinubu office. He eventually became the first General Manager of Exploration of any multinational oil company in Nigeria, beating Edmund Daukoru (who became Shell’s first Nigerian GM of Exploration), to that title by some months. But Iyamu’s leap into the dark had lit up the possibilities. His sacrifice had made it possible for many others to dare. Today, the idea that you had to be a big manager in a multinational to validate your career is passé. Do you want to be the Executive Director of an E&P company which you co-founded and in which you have significant shareholding, producing a tidy volume of oil every day, or do you want to be a Managing Director of the local subsidiary of a company with headquarters in Paris, or The Hague or San Ramon, running the business largely with template from the headquarter offices?  Iyamu’s exit from Shell 30 years ago, and the success he made of the move, make that question easier to answer today.

There are variations of the empowerment story that Ariyo shares about Iyamu. “He felt he was seeing his dream realized through us”, remarks Tunde Afolabi, of his first meeting with Iyamu. Afolabi is the Managing Director and co-founder of Amni Petroleum, a Nigerian company with assets in the prolific South East offshore. “Layi Fatona introduced me to him as this American based friend of his with wild ideas about revolutionizing the indigenous industry. We hit it off well. He kept a close tab on our trio, Tunde, Layi and Bayo (Akinpelu). We were going to get Farm Outs from the IOCs. We started with Shell, then Gulf.   I have never met a man with such small eyes burning with passion and determination. He taught Layi and I a few of the tricks to deal with the IOCs, and encouraged the likes of Ebi Omatsola (Managing Director of Conoil Producing) and Chief Wole Ariyo to help us along in our quest to germinate the Indigenous Industry”.

Most of the stories around Iyamu by the folks who worked with him are the fond memories of his sheer passion and energy for building human capacity. “Small as it was, Geotrex was dedicated to sending its staff to postgraduate courses in outstanding Universities like Imperial and Cambridge and I can give you five names, readily”, comments Seye Fadahunsi, who joined Geotrex with a Master’s Degree from Hull, left the company to work for Shell, then Statoil, then SAPETRO and is now executive director of Pillar Oil, a 2,500BOPD marginal field company which he co-founded in 2002.

Some other stories are far more dramatic. “I can still hear his laughs as he walked me to a tube station in London all the way from his house”, Seyi Ogunjobi recalls. “It’s not a typical behaviour (to a new graduate) of a former Shell exploration manager. I learn a lot from his benevolence and humility”. Ogunjobi has relocated to the United States with his family, but he feels gratitude to the man they call ‘The Explorer’s Explorer’ for his own good health. “I have been Diabetic (Type 1) for 17 years and if not for the benevolence of Mr. Iyamu, I would have ended quite prematurely a long time ago. But I am still a geologist and a very healthy one at that. So for me, he is not just Explorer’s Explorer but a life saver extraordinaire”.

That aspect of Iyamu is what Promise Egele, former reservoir engineering manager at Shell, remembers. “My wife has not and will never forget the first dinner we enjoyed a week after I got back to Lagos with her. A young, inexperienced explorationist being treated to a great dinner by the first Nigerian Exploration manager of ‘Big Shell’.  That was awesome. This was in October 1981 at the then Ikoyi Hotel”.

Geotrex Systems provided part of the shell of the melting pot that became the Niger Delta Petroleum Resources. Sammy Olagbaju, a founding director of the company, says he first met with Iyamu about 20 years ago, “in the early days of our putting together, the predecessor company of Niger Delta Exploration & Production. Then we sought refuge, at some point, at the offices of Geotrex. Subsequently, I met him at the Annual General Meetings of ND E&P Plc”.

Iyamu “donated” Fatona to Niger Delta Petroleum Resources and its twin Niger Delta Exploration and Production, the first company to win a marginal field from a multinational. For its 13 year history, Fatona has been the CEO of that company, now producing 2,5000 BOPD from the Ogbele field, and is the core company in ND Western, which bought Shell/ENI/TOTAL’s 45% stake in OML 34 in November last year.

As I was writing this piece, Harold Obasohan, managing director of Century Production Limited, a Nigerian E&P company with interests in a marginal field in Bayelsa State, showed up in my office. “Have you heard of the demise of Mr Iyamu?”, he asked. Harold’s career was forged in the crucible of Geotrex Systems. His tribute to the man whose company made him was shorter than most, but has larger symbolism. “You know”, he said, “Iyamu’s lifestyle was what it means to be a truly big man. He had no airs. So sure of himself, he was the authentic Naija hero”.