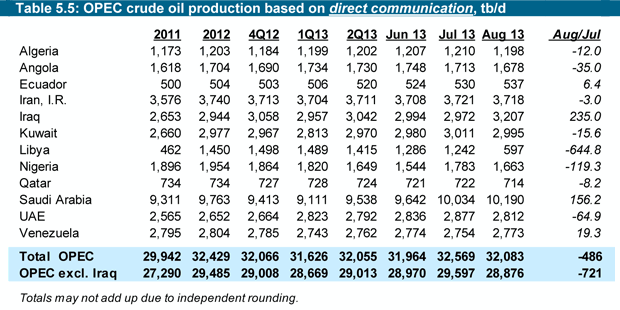 Algeria’s crude oil production has remained relatively flat, as has Angola’s, but that of Nigeria and Libya have fallen, between 2012 (yearly average) and 2013 (1H average), according to the Monthly Oil Market Reports (MOMR) published by the Organisation of Petroleum Exporting Countries(OPEC).
On a month to month basis, after the first half of 2013, all the four top producing countries in Africa suffered a decline in production between July 2013 and August 2013, with production in Nigeria and Libya falling more steeply. Libyan production fell by 644, 800BOPD, while Nigeria’s fell by 119, 300BOPD, between July 2013 and August 2013.

Elsewhere in the continent, Congo (Brazaville)’s average oil production for 2013, is expected to decrease by 20,000BOPD, to average 280,000BOPD, due to the natural decline impact of the Azurite field output.

South Sudan, Sudan, and Ghana buck the trend. Indeed, these three are some of the main contributors to the anticipated Developing Countries’ supply growth in 2013, South Sudan’s and Sudan’soil production is forecast to average 220,000BOPD in 2013, an increase of 100,000 BOPD compared to the previous year, indicating an upward revision of 10,000BOPD in August 2013, compared to July 2013. The upward revision was introduced as the two nations averted the previously extended shutdown of the connecting pipeline and decided to continue with the established agreement. Further upward revision to the supply forecast might be experienced in the coming period if the two nations demonstrate commitment to the agreements, the OPEC report said.