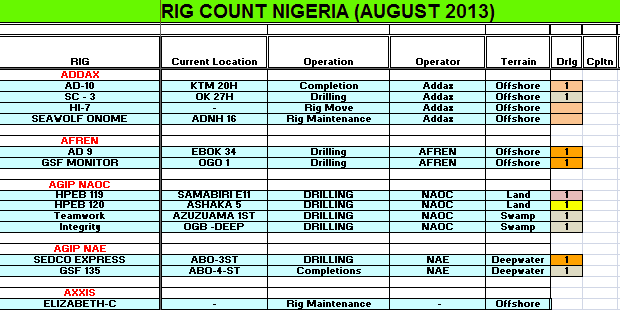 Nigeria’s rig count of 43 in August 2013 accounts for more than a third of Africa’s total rig count of 125 for the month.
Of the details provided by the Nigerian chapter of the International Association of Drilling Contractors, Shell, the country’s largest operator, utilized nine rigs in all, with eight (8) on onshore locations (three in swamp, five on land) and one drilling a deepwater well.

Agip companies in Nigeria the local subsidiaries of the Italian ENI group were collectively next to Shell in size of drilling activity, with six rigs deployed on four onshore and two deepwater wells.
ExxonMobil was active on four shallow offshore locations with four rigs.
French major TOTAL had four rigs on duty in four locations, with two completing and two drilling ahead; three of these locations were in deepwater and one was on land.
Addax utilized two rigs in the month, on two offshore locations. It had access to two more rigs, one in maintenance and the other just arriving on location.
Nigerian indigenous companies deployed 15 rigs on 15 locations with Seplat and Conoil each with three rigs, Pan Ocean on two rigs, and Energia, Frontier, Network, Newcross, NPDC and NDPR were each on one location.

The figure of 43, however, differs from that of OPEC’s Monthly Oil Market Reports (MOMR) whose September 2013 edition puts Nigeria’s August 2013 rig count at 33, but doesn’t provide details.