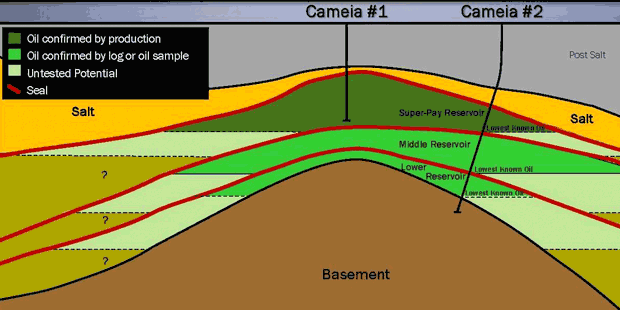 Sanction for early production may not come anytime soon

Cobalt Energy planned to drill six wells, then revised it to four wells, offshore Angola in 2013, all for pre-salt reservoirs, some of them to appraise the Cameia-1 discovery. The results have been mixed and only three wells have been drilled by this late in October 2013.

Whereas Cameia #2 “confirmed the extension of the same exceptional mound reservoir as seen in Cameia #1.” , the company’s drill stem test of the lowest interval drilled in the Cameia #2 well in Block 21, did not produce measurable hydrocarbons. Cobalt says “the results of this drill stem test have no bearing on the commerciality of the Cameia Mound Development Project”. While hoping that Sonangol, the Angolan state hydrocarbon company, would sanction its plans for early production of Cameia, the . company didn’t provide any information on the hydrocarbon footage encountered in the mound reservoir in Cameia #2. Cobalt, meanwhile isn’t providing any information on Lontra #1 well (drilled by Petroserv Catarina rig),  in Block 20, where it has since finished drilling and logging operations.  The Diamond offshore rig Ocean Confidence is drilling the Mavinga #1 well, adjacent and north of the Cameia discovery in Block 21. “These wells are deemed Tight Hole – and I mean super tight”, Cobalt sources say. The company is not keeping to its promise to release “results from the wells at least by early in the fourth quarter 2013”. Cobalt owns a 40 percent working interest and is the operator of both wells.