Oil Companies Line Up In Support of Literacy Campaign 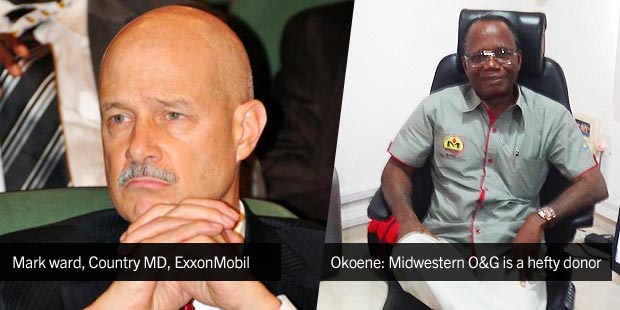 The Lagos Book and Art Festival (LABAF), scheduled November 15-17 this year, has a broad theme that resonates with the idea of Nigeria as a geographical space.  Nigeria’s Centenary: The Lagos Narrative interrogates the century old effort at Nationhood since the British cobbled together the country from a number of kingdoms located north and south of the Niger river in 1914.
ExxonMobil, the world’s largest International Oil Company, is supporting the three day review of books and reading activities through its subsidiary Esso Exploration Production Nigeria, with the support of state hydrocarbon company NNPC as well as the Shell subsidiary SNEPCO, both of whom are co-venturers in a Production Sharing Contract.
Also investing hugely in the Festival are Midwestern Oil &Gas, the largest marginal field producer in the country,Niger Delta Petroleum Resources, the first company to be awarded a marginal oil field in Nigeria, as well as Pillar Oil and Energy and Mineral Resources(EMR), the last being not an E&P company like the others, but an oil service company.
Pillar Oil and NDPR are donating for the second, consecutive edition. EMR is donating for the third time. ExxonMobil (with partners NNPC and SNEPCO) are backing the Festival for the first time. “It’s an incredible gesture to have such iconic private sector enterprises support our campaign to rid the nation of ignorance”, says Jahman Anikulapo, programme chairman of the Committee For Art(CORA), organisers of LABAF. “We need to partner and raise the stake of the Lagos Book and Art Festival“, says Layiwola Fatona, Managing Director of NDPR. “Your book event should be an international event of significance”. Anikulapo says that these companies have, with their support,  joined the British Council and the (German Cultural Centre) Goethe Institut, who are both providing material and institutional backing for the festival.
“British Council is funding the trip of writers from Britain, including some of the Nigerian candidates who made the final shortlist of the last Caine Prize. Goethe Institut is flying in book publishers, from around Africa, for The CORA Publishers’ Forum, a key event which happens during the course of the festival”.
The Publishers’ Forum provides a concentrated space for publishers to gain critical insight into their current operations within the context of the challenges facing their industry, brainstorm on their findings and identify key steps that can be taken as individual businesses or as a collective to improve their bottom line.

The 15th Lagos Book and Art Festival will run from November 15-17 at the Freedom Park in Lagos, and feature readings and discussions of 20 books in the space of the three days, and a large Children section involving over 2,000 kids of ages 8-17 focused on discussions around books just the same way as the adult section.