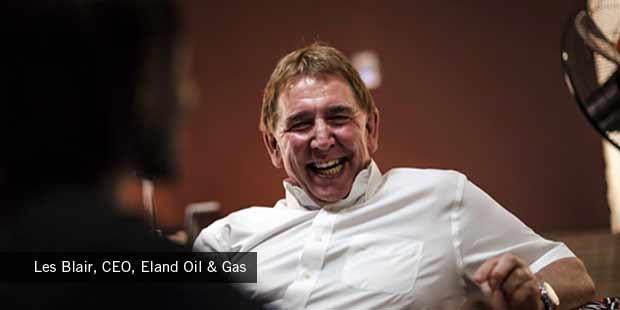 By Toyin Akinosho, in Abuja

Les Blair has been raring to go at OML 40.
Close to a full year before the close of the purchase transaction of the Oil Mining Lease with Shell in August 2012, he was telling an investors conference what it would do on the asset.

“Drilling is the only way to develop OML 40”, Elcrest said at a talkshop organized by the First City Monument Bank in Lagos, in September 2011. “Elcrest has inspected swamp rigs in and outside Nigeria and our preference is to use a local drilling company in the country”, the company assured. “The Elcrest drilling budget is expected to be up to 80% of the Capex budget”, Elcrest remarked. “A sustained 3-5 year drilling activity will be a boost for local content development and create numerous jobs, thousands of jobs ,as this is an asset that could produce over 50,000 bopd in four years“.

Elcrest is a special purpose vehicle formed for the purpose of acquiring OML 40 from the Shell Nigeria Joint Venture divestment process. Elcrest targeted OML 40 as a cornerstone asset for the company, an incorporated Joint Venture consisting of the Blair’s UK listed Eland Oil and Gas (45%) and Starcrest Nigeria Energy Limited (55%), an indigenous company with major oil and gas interests in Nigeria. Shell had been operating OML 40 since 6th of March 1964.

Blair, whose Eland Oil and Gas is essentially the funding and technical partner to Starcrest in the Elcrest vehicle, has prioritized re-start of production of Opuama field in the acreage, while the drilling plan is being worked up. “Production means there’s cash flow. Its deferment means a delay in cash flow. Investors will gain more confidence in us when there’s cash flow”, Blair told me at an interview in his office in Abuja in the first week of October 2013.

Blair told me he believed that two wells would be producing 2,500 BOPD by October 31, 2013, but a week later, he released an operational update admitting a deferment of production to the end of the year. “Eland have worked closely with the Operator (NPDC) to re-start the production in a challenging operating environment. This joint approach has ensured that the complex issues have been addressed collectively and resolved to provide the best opportunity for an early restart of production on the facility which has been shut in for 7 years”, the update said. “While fabrication and installation of flowlines for wells are completed”, the update declared, “issues must still be tackled before production can start”.  The update explained that “purchasing of major components for the flowstation on the site has started with work on that area expected to last up to five weeks”.

Is the ‘challenging operating environment’ referred to in the update about disruption in oilfield activity, or is it, indeed, mostly about the nature of the partnership that the company was forced into, at the onset of acreage acquisition? The operator of the asset is an inefficient subsidiary of the state hydrocarbon company NNPC who, in addition to its ineffectiveness, also has the burden of government approval for contracts. Any large project has to go to the Bureau of Public Procurement for approval.  NPDC tendered for a swamp rig in January 2013 and that’s going through BPP. There’s not enough swamp rigs in the world. Indeed, Swamp rigs are the scarcest rigs on the global oil patch. Yet the tender process can take two years.

“It’s critical that the tender process is accelerated”, Blair said, trying hard not to sound frustrated at the pace of development in OML 40. If he had his way, I could read from his body language, by now, the acreage would have been producing 2,500 BOPD after a field overhaul and new wells could have been drilled, for increased production. “We don’t need to re-enter any well to produce oil. NPDC have done the integrity check and replaced all the flow lines already”.

Blair is quite respected around the Nigerian segment of the oil patch. He has been around the block a few times and seen quite some action.

He worked for Addax Petroleum in Nigeria from 1998 to 2006. He was in Kurdistan and the UAE from 2007 to 2010, after which he left the company to form Eland. The Chinese had bought Addax for $10 Billion and it was a different culture. “The culture of Addax was very entrepreneurial , fast moving and very enjoyable.”

I asked him what he thought of Jim Pearce, who was brought in from Chevron to take the reins of the company’s leadership three years before the Chinese buy out. “Jim was very management orientated”, Blair remembered. “He was big oil. The guys who founded Addax ran it like a small entrepreneurial start up and ran it very successfully and the company grew a lot faster than any of us imagined at the time”.

In the 80s, Blair had worked for KCA Drilling in Spain and Libya  then he was with Enterprise Oil and British Gas in Vietnam for eight years just when the country opened its doors to the Western world.

Blair has had close encounters of the Indiana Jones kind. While on posting in Libya between 1986 and 1989, he was imprisoned for a month apparently for being a spy for Israel. “It was merely an excuse to have me toe the line and match my personal aspirations with those of the nation and it was a excellent lesson in working in a culture that was not my own ”.

His involvement in OML 40 is the largest investment in his life. “We were  a start up and we didn’t have lots of money”, he told me. “All we had was our reputation”.

He says that onshore development is not technically difficult. “We convinced Shell we were credible and technically capable. It was an open auction and we had to demonstrate our capabilities. We convinced a number of investors. They asked how do you know you could do it?  I said we had done it before and could do it again.”

Elcrest’s bid had its share of a near scandal, brought on by an accusation by Vertex, a rival bidder, that “the process was switched into selective auction in which some bidders were unaware of the changing rules”.
Vertex alleged that “while bidders for OMLs 30, 34 and 42 received letters asking them to formally submit new bids after the first round of bidding, such a request was not made on OML 40. However, our competitor, Elcrest, was allowed to submit a new bid slightly higher than the original bid from Vertex.”

Blair explained that “Shell carried out a thorough and comprehensive bid auction that was carried out with full regard to the confidentiality and transparency of the process and unfortunately it is commonplace in Nigeria that defeat is not accepted in good grace. Bid clarifications were requested from all parties and we asked if that included submission of a new bid as had been done on the other licenses and it was confirmed that we could do so and that is exactly what we did”

Eland’s decision to raise the money abroad was in sharp contrast to the resort of winners of other Shell operated acreages to raising money locally. “The asset wasn’t in production so we didn’t think we could get the money from local banks”.

Besides, he preferred listing, from day one, to private equity, which he feared, could turn him into a mere employee. “Once you’re listed it’s a seal of approval”. At some point in time, he thinks, the company will move into the main London Stock Exchange, to improve liquidity. “We have been approached by the Nigerian Stock Exchange to list in Lagos too”.

For Blair, the latter is both a moral and commercial imperative. If you are only listed abroad, Nigerians can’t invest in your stocks except as nominees of Nigerian banks trading overseas”. With the possible exception of Oando, no oil producing company in Nigeria is listed on the local bourse.  The irony is that oil is the country’s prime resource. The company’s focus is in West Africa and Nigeria dominates. “It’s good to list in Nigeria from a financial point of view”, Blair says. “It’s good for us, to spread our risk. There’s a huge capital base in Nigeria that would like to invest in Nigeria but don’t have the opportunity. It’s also good business, 90% of the country’s pension funds are in Treasury Bonds and they should be able to invest in the oil and gas industry which will be good for the industry and provide better returns to the Pension Funds.”