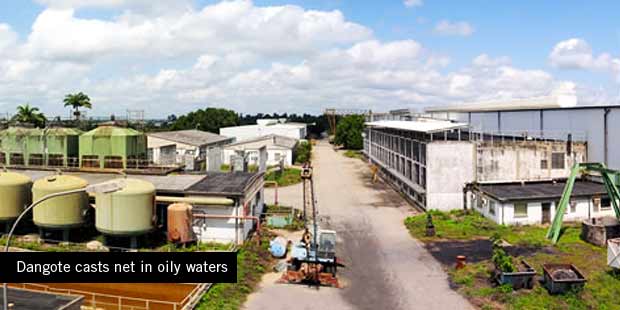 A month after the continent’s richest tycoon announced the scheme, promising to spend $8billion of his own money on the project and unveil it by 2016, “Dangote acknowledged that his plan might face stiff political opposition from interests benefiting from Nigerian products imports”, wrote Neil Fleming, an associate consultant with the London based CITAC, a global consulting firm whose activities include downstream oil and gas analysis.

“His decision to build it appears to go against the logic that has prevented commercial refining in Nigeria to date”, echoed the Financial Times of London.

A $3.3billion loan deal to build the refinery, petrochemical and fertilizer plant on Nigeria’s Atlantic coast was signed in September 2013 with a consortium of 12 Nigerian and international banks, as part of a $6.75billion debt financing arrangement to augment the equity contribution in the project by the group.

The refinery component, Dangote said, will take in 400,000 Barrels of crude oil per day and output over 7.684 million metric tonnes per annum (MTPA) of gasoline, otherwise called premium motor spirit (PMS); about 5.30 million MTPA of automotive gas oil (AGO) or diesel; about 3.740million MTPA of Jet Fuel/Kerosene; about 0.213million MTPA of liquefied petroleum gas (LPG), and about 0.625million MTPA of slurry/fuel oil.

Contracts for the construction of the refinery and petrochemical plant have been awarded to United States-based conglomerate, UOP, a subsidiary of Honeywell International, a Fortune 500 company that specializes in consumer products, engineering services and aerospace systems.

The project manager for the refinery and petrochemical plant is India Engineers Limited, an Indian government-owned company credited with the setting up of refineries in India. Saipem, an engineering subsidiary of Italy’s ENI, won the contract for the fertilizer plant.

What fuels the skepticism around the refinery component of the project most is that the investment decision has taken place against the background of incomplete deregulation of Nigeria’s oil and gas downstream. Government controls the prices of PMS and Kerosene, while the prices of AGO, DPK, Aviation Fuel, LPG and other petroleum products have been determined by market forces since 2001. Any attempt by the state to leave the price of PMS to the vagaries of the market is forcefully resisted by Nigerians. And yet the subsidy payment to petroleum marketers who import the products at international prices has ballooned so much it is taking up cash that could have gone to fund infrastructural projects.

“Nigeria itself is a big risk” sighs Sam Ojibua, an oil and gas analyst in Johannesburg, South Africa “and its downstream oil and gas sector is riskier than most of the other sectors”. Ojibua says that when crude export pipelines are attacked, as they often are, for instance, 400,000BOPD, which is over 25% of current output, becomes less attainable.

The PMS, the main fuel of transportation, has the largest share of the refinery’s proposed product mix. “When Dangote says his refinery would supply about half of the country’s consumption of petroleum products, he is simply referring to the volume of PMS he wants to supply” Ajibua notes. “That figure: 7.684Million Metric Tonnes Per Annum, represents half of the annual weight of gasoline the country consumes”.

The Dangote Refinery is expected to buy crude oil at international prices and then sell the products to the same cast of marketers who currently import the products. The refinery is expected to be a wholesaler of petroleum products and if the price of its PMS is higher than the subsidized price, the buyers pay in full and get the subsidy from government. If the Dangote refinery chooses to be a retailer, then it gets paid subsidy by government. A questionnaire to Dangote Group around this issue had not been answered as we went to press. The Financial Times apparently put this same question to Ngozi Okonjo-Iweala, the coordinating minister for the economy. “If you are selling refined petrol, you will get the subsidy, ” was her reported response.

In Nigeria, there hasn’t been a national concensus on how much PMS can cost in the market if it is made in the country. The only maker of the product has been the chronically inefficient state hydrocarbon company NNPC.

There is one thing though: the so called landing cost of PMS, which is considerably higher than the pump price the government allows, is due to a series of charges that include those by middle men as well as import tariff. These costs will be eliminated by a local producer, especially of the scale that the Dangote refinery will operate. The Financial Times reports Mrs. Okonjo-Iweala as saying that since the refinery is planned in a free zone where it will benefit from tax breaks, it could be producing at close to what Nigerians are accustomed to paying.

Dangote’s plan for supply of cooking gas, LPG, is ambitious, going by the size of the Nigerian market. The Nigerian Liquefied Natural Gas (NLNG) produces 250,000 Metric Tonnes Per Annum of LPG, a figure it has only just reached in mid- 2013 and which is more than three times the 70,000 MTPA it was producing as recently as September 2012. It has taken a considerable effort at marketing by several companies, to “popularize” the idea of using LPG, for the market to grow to absorb 250,000MTPA. For upwards of a decade, the demand simply wasn’t there.

Now the Dangote Refinery expects to produce 213,000 MTPA on top of that.

The assumption frequently expressed in Nigeria’s local media, is that the states in which the Fertilizer and the Petrochemical Plants are to be located are rich in gas reserves. That’s utterly wrong.

For one, Edo, Ogun and Ondo states are located on the flank of the Niger Delta basin, and whatever Edo state could have in terms of gas, has been taken up for other projects, especially a power plant like Ihonvbor.

Now, even if there was a lot of gas in these areas, we need to be constantly reminded that gas projects are not the “plug and play” that crude oil projects are. To go by the Nigerian gas map, as constructed, today, there is no certainty that there’s any gas project lined up for Dangote’s fertilizer plant. The Dangote Group is known to have been sourcing for gas from producers.

The company’s sub-optimally run website says that it has ventured into, among other things, gas exploration. The facts on ground are that this is a group that has been a little shy about getting the really sizeable assets upstream (exploration and production).

A 9 % equity in Block I in the Joint Development Zone ( JDZ ) of Nigeria Sao-Tome (from which the original partners, Chevron and ExxonMobil, and the latest entrant, TOTAL, have pulled out); and 10 % working interest in Block III in the same JDZ .These percentages are not only small, but the prospects themselves are not amazing. Nor is the OPL 315 in deepwater Nigeria (with partners Petrobras and Statoil) one of the country’s signature acreages.

Would the Dangote Group want to own hydrocarbon resources of its own to use as fuel stock for its chain of downstream projects? Perhaps in the near term.

It seems likely that the fertilizer and petrochemical plants will be built after the Refinery has been completed, by which time the bottlenecks in gas supply in Nigeria are expected to have eased.

Dangote Group has succeeded hugely in Africa, in spite of the severe restraints to business on the continent. Even the worst sceptics say that so long as it is Dangote, he must have seen what they don’t see. Mr. Dangote doesn’t go into any venture without knowing he would make money.

« South Africa Not In A Hurry To Build Mthombo Refinery
Uganda Refinery: Shortlist Down To Four »