Anadarko In Algerian Gas Production For The First Time 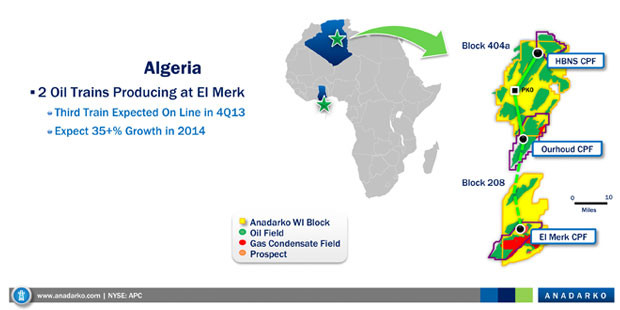 With two oil trains of the El Merk project already on stream, Anadarko expects the Liquefied Petroleum Gas (LPG) and export natural gas unit to be on stream by end of 2013.
It will be the first time that the American independent will be producing gas from Algeria.

El Merk is expected to produce 30,000 barrels of LPG per day by the end of 2013, though it’s not clear if the target would be accomplished.

Anadarko is one of the biggest operators in the country, with 1.7Billion barrels of gross oil produced in its 25 years in Algeria, but despite the fact of Algeria being the continent’s largest gas producer, Anadarko’s production has been limited to oil.

El Merk is an oil and condensate field located in Block 208, approximately 300 kilometers south east of Hassi Messaoud in the Algerian Sahara in a remote, harsh desert location where the terrain consists of large interlocking sand dunes. The El Merk project has been established to design and construct the surface facilities required for the exploitation of hydrocarbon liquid reserves of six reservoirs in Blocks 208, 405a and 212 in Algeria. The entire El Merk development will be operated by the Sonatrach-Anadarko Association, which includes ConocoPhillips, Talisman Energy, and Maersk Oil. It is expected to bring on stream between 100,000 to 150,000 BPD of crude oil, condensate, and liquefied petroleum gas (LPG).

Production started in March 2013 but had only delivered first oil outside the complex May 3, 2013