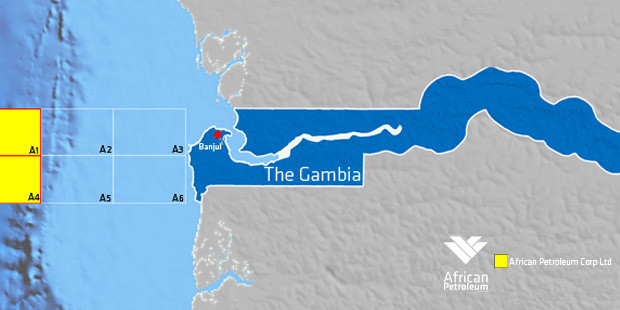 The Gambian government, warning it would “not allow any institution to acquire licences only to keep them for speculation”, has terminated three exploration licences  held by three companies in the country.

They include “Offshore Blocks A1 and A4 licensed to African Petroleum Gambia Limited and Buried Hill Gambia B.V. as partners; Onshore Block Lower River licensed to Oranto Petroleum Limited”, the Government declared.

A press release from the country’s presidency said  that the government of The Gambia, “acting in accordance with the provisions of the petroleum laws of The Gambia has terminated petroleum exploration, development and production licences due to failure to meet the licence obligations by the licensees”.

AP entered into a farm-in agreement to acquire a 60% operated interest in Blocks A1 and A4  in 2010. The remaining 40% equity was held by Buried Hill Energy.  The combined blocks cover 2,668km2. Later in the same year, AP contracted TGS to acquire a new 2,500km2 of 3D seismic survey over the Blocks in late 2010. AP reported that more than 30 exploration prospects and leads have been identified on the Gambian Licence Blocks, in five different play types. “The four-way dip closed Alhamdulillah structure has been confirmed, which extends over an area of 24km2 with multiple mapped reservoirs from Maastrictian to Jurassic in age. There are potential mean unrisked recoverable prospective undiscovered resources of approximately 500 million barrels (Source: ERC Equipoise independent review of African review of African Petroleum resource, April 2011)”, the company announced.

The Government of The Gambia was clearly upset. “In our bid to harness our natural resources for the benefit of Gambians, we are not going to deal with speculators,” it concluded.

« Kosmos In Due Financial Season
Geologist for West African basins, working out of Houston »