Electricity generation has fallen by 900MW since all time high production of 4,518MW achieved in December 2012
By Fred Akanni, Editor-in Chief

Nigeria could have generated 69% more publicly supplied electricity than it did in the first week of January 2014, if there was enough gas to fire all the functioning turbines in the power plants supplying the grid.

The country generated 3,631Megawatts per day (MW/d), compared with 3,532MW/d in the last week of 2013, an increase of 99MW attributable to the return of the Ibom Power plant into the national grid. 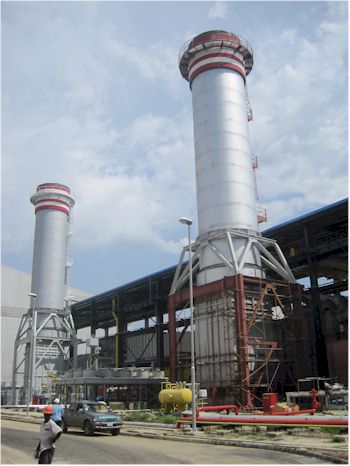 But this is only 58% of the total power that could be generated from all the functional turbines in the country’s 24 power generating stations.  Even while over 20 turbines are faulty in the 10 power plants located in the west of the country alone, Nigeria can still readily generate 6,143MW with the available facility, if there was adequate gas supply.

Egbin, Olorunsogo(NIPP), Omotoso (NIPP), Ihovbor (NIPP) (all in the west) and the two power plants in Geregu, namely Geregu NIPP and Geregu PHCN, located in the north of the country, were all maintaining “low generation due to reduced gas supply”. The state hydrocarbon company NNPC was continuing  re-commissioning of a leg of the Escravos Lagos Gas Pipeline that was damaged in June 2013 and expects completion by 3rd week of January. This will at least boost the gas supply into the system. For one, Chevron is unable to supply the entire 350MMscf/d it earmarks for the system because of the damage.

The highest, publicly supplied power generation in the history of the country was 4,518Megawatts per day (MW/d), attained on December 23, 2012. The country never came close to achieving this level for an entire year.