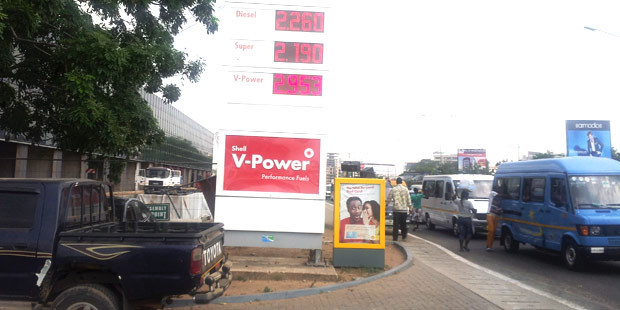 There have been four price adjustments since the January 2012 ‘announcement’
By John Ankromah, in Accra

There’s no hint of any planned protest, or civil disturbance in Accra, capital of Ghana, three weeks after the authorities implemented a fifth gasoline price increase in 24 months.

The prices have been adjusted four times since February 2013.

The direction of changes in the prices of the two products, with one (petrol) up and the other (diesel) down, is the strongest indicator of the influence of market forces

The strength of the local currency against the US dollar and the price of crude oil in the international market, are the two factors that determine the prices of petroleum products.

Diesel costs higher in cedis terms, relative to the price adjustment of March 2013,but lower in dollar terms

Deregulation kicked in with full force in Ghana in January 2012, when the country’s National Petroleum Authority (NPA) announced changes. In February 2013, the government announced a second price increase “based on the crude oil price of $116 per barrel and an exchange rate of GHC1.89”.

The current prices, which came into effect on January 16, 2014, were more a result of the drastic fall of the Ghanaian cedis against the US dollar. Even as crude oil prices have remained much lower than the $116 at which the subsidy reduction kicked off, the exchange rate has fallen sharply to 2.35: 1 today, from less than 1.7: 1 in January 2012.

Subsidies are heavily contested issues in Africa. Egypt, Nigeria and Angola, all hydrocarbon producing economies, have challenges erasing subsidies. A litre of gasoline is officially sold for $0.6 (or 97 Naira) in Nigeria, whereas in Angola, the product is sold for less, at $0.4 (or 40Kwanzas). Both countries import most of the products.