Ghana Has A $20 Billion Opportunity In The E&P Space 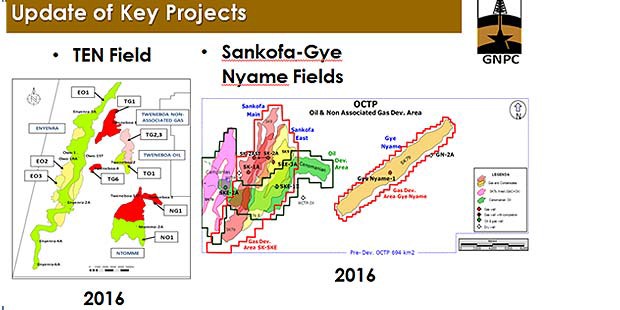 “We want partners whose office addresses we can reach…there’s a lot to do”
By John Ankromah, in Accra

Some $20 Billion will be spent on Exploration and Production in Ghana between 2014 and 2019. The money will be spent by oil and gas companies on a range of services from seismic acquisition through hydrocarbon storage, processing, logistics and export facilities.

Three big ticket projects are responsible for most of the opportunity, according to Alexander Mould, the new managing director of Ghana National Petroleum Corporation, the state hydrocarbon company. They include the TEN cluster, whose development is ongoing, Sankofa-Gye Nyame fields, whose Plan of Development is still in discussion and the MTAB cluster, which is in pre-development plan stage.

Farther down the line is the Hess Corp. operated acreage, also in the prospective deepwatwer Tano basin, where the American independent has seven discoveries, due to be appraised in 2014. The company may start progressing development activities around 2015-16.

Mould says that Ghana is open for business, to companies with any range of services, on terms that factor in Ghanaians as partners. “We want to know your office address, we want organisations who want to stay here”, he told delegates at the Offshore West Africa Conference in Accra last week, “not those who come in the morning of Monday and leave on Thursday evening”. Oil service companies in well services, subsea activity, shipyards, equipment fabrication, pipeline installation and repairs, all have a chance to look in.

Of the three projects, the development of TEN, which is acronym for Tweneboa, Enyenra and Ntomme fields, has gone far. Centennial Jewel, a Very Large Crude Carrier (VLCC), is in the process of conversion into a Floating Production, Storage and Offloading (FPSO) vessel at the Jurong Shipyard in Singapore. The Japanese contractor MODEC is overseeing the conversion and it has responsibility for the engineering, procurement, construction, mobilization and operation of the FPSO, including topsides processing equipment as well as hull and marine systems. TEN development is billed to cost around $5Billion and the project is scheduled for commissioning in 2016. The contract area is held by Tullow (47.175%) as Operator, Kosmos Energy (17%), Anadarko Petroleum (17%), Petro SA (3.825%), and the Ghana National Petroleum Corporation (15%). Scheduled for delivery during 2016, the FPSO, designed to remain operational for up to 20 years, is expected to handle the projected plateau production of 80,000BOPD, 170 MMscf/d of gas and has storage of 1,700,000 barrels of total fluids.

The Sankofa-Gyame twin field development resulted from Italian major ENI’s 2012 discovery of  76 meters of gross oil pay and 28 metres gross gas and condensate sands in Cretaceous sequences in the Sankofa East-1X well on Ghana’s Offshore Cape Three Points (OCTP) block, with a production test of the oil-bearing zone delivering roughly 5,000 BOPD. ENI keeps saying it could deliver first oil/gas from this field by 2016, even though field development discussions are still ongoing with the authorities and sanction has not come through. The Sankofa-Gyame fields have always been assumed to be gas prone.

ENI, in fact has a domestic gas supply agreement with the authorities, along with partners Vitol and GNPC.

MTAB refers to Mahogany, Teak, Akasa and Banda fields and is in pre-development plan stage, with some wells still needed to be drilled for certainty.