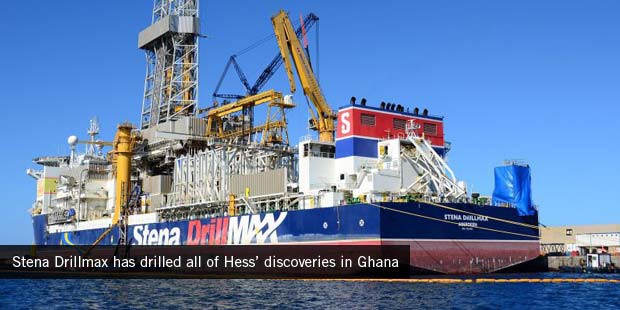 Hess Corp. has a $550Million exploration budget in 2014, of which the top priority is to drill three appraisal wells offshore Ghana. The American independent will also perform one drill stem test on either any of these new wells, or one of the seven wildcats it had earlier drilled.  The location is Deepwater Tano / Cape Three Points Block, which the company operates with 90%.

Of less importance than Ghana in this budget are two wells at the Dinarta and Shakrok Blocks, where Hess holds 80% operatorship in Iraqi Kurdistan and 3-D seismic and technical studies in the deepwater Gulf of Mexico, in preparation for resumption of drilling in 2015.

Outside of the exploration spending, Hess has a production budget of $350Million, in the same year, to drill five production wells at the Okume Complex and progress facility work at the Sendje Ceiba floating production, storage and offloading vessel (FPSO) at Block G, which the company operates with 85% in Equatorial Guinea.

Hess made the first oil discovery in Ghana in April 2011 with Paradise 1, which logged 37metres net oil pay and 90 metres net gas-condensate pay. Since then, it has made six more discoveries in the licence, but appraisal of the earliest of these finds have is coming three years after the first discovery. With this timeline, sanction for Plan of Development (PoD) will certainly not happen until 2015. Hess is not in a rush to develop its several finds in Ghana, which it considers a “longer term growth area”.