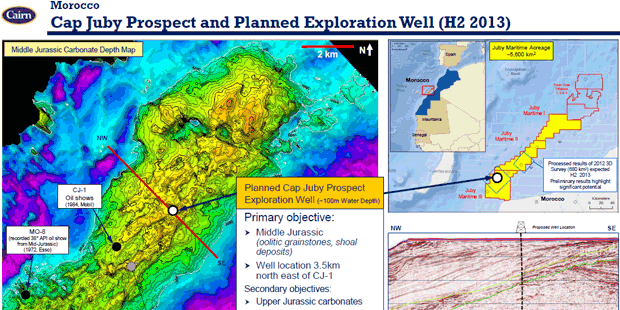 Two wells have been plugged and abandoned as unpromising, almost back to back, in Morocco, in the last one month.

Canadian minnow, Longreach Oil and Gas, encountered only gas shows in the wildcat Koba-1, in its operated licence area onshore Essaouira Basin. So did Scottish independent, Cairn Energy in the FD-1 exploration well, drilled in 1,500 m Water Depth, in the Foum Draa block, offshore Morocco.
In either case, it was the company’s first drilling in the country.

“The Lower Liassic sandstone was encountered very close to the expected depth and has a gross interval of approximately 45 metres showing reservoir potential”, Longreach reported. “Over this section, gas shows of over 10% were encountered with heavier hydrocarbon components of over C5+”.

Longrech logged two targets, including the prognosed Triassic sandstones after the Lower Liassic section. It reported “No further potential reservoir sections or significant shows were encountered beneath the Lower Liassic”.

Cairn is the operator of Foum Draa, with joint venture partners ONHYM, San Leon Energy plc, Serica Energy plc, and Longreach Oil & Gas Ltd. The next well in the company’s exploration programme is in the Juby Maritime III block in Morocco (Cairn, 37.5% WI, operator) and it will target a Middle Jurassic carbonate prospect located in 100 m (328 ft) of water, where the primary objective is some 1,000 m (3,281 ft) below the 1969 Cap Juby oil discovery in the Upper Jurassic

The Koba structure is the first prospect to be drilled as part of Longreach’s exploration well programme.  The company has a 50% operated interest in the Sidi Moktar licence area covering 2,683 square kilometres. Longreach is partnered by ONHYM and MPE (25% carried interest each).