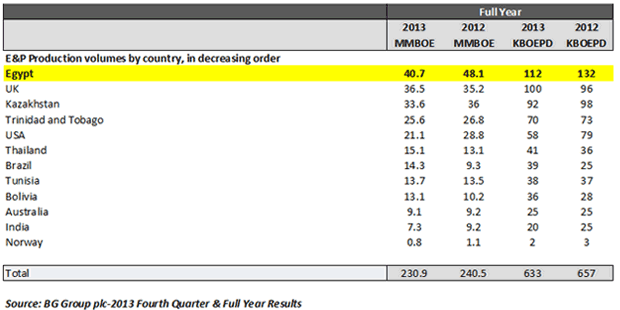 …But the North African country remains the largest E&P contributor to the company’s portfolio by volume..
By Toyin Akinosho

For its 2014 Outlook,  the company expects unit operating expenditure to be in the range of $15.50 -16.25 per BOE at reference conditions, up from $12.17 per BOE for 2013, reflecting, in part, “the declining production across the base assets, especially Egypt”, BG says in its fourth quarter 2013 statement.

The company’s LNG Shipping & Marketing total operating profit for 2014 is expected to be in the range of $2.1 – 2.4 billion at reference conditions, “reflecting lower supply volumes from Egypt” and reference conditions lower than realised prices in 2013. “There is considerable uncertainty over the number of LNG cargoes that Egyptian LNG will produce in 2014”.

BG’s production is declining in Egypt. Daily output fell from 132,000BOEPD in 2012 to 112,000BOEPD in 2013. Exploration successes have matched the pace of production decline.  Yet the British major is losing control of deciding what to export and what to sell in the local economy.

BG had reported bitterly, in earlier statements, that “diversions to the domestic market during the fourth quarter (of 2013) were higher than expected. The revised pooling arrangements for 2013 have not been honoured and domestic diversions are currently at around capacity, close to 1 billion standard cubic feet of gas per day. As a result, BG Group has been unable to meet in full its obligations to deliver gas to Egyptian LNG and given the current levels of domestic diversions and the continued uncertainty around the level of future diversions, BG Group has served Force Majeure notices under its LNG Agreements. BG Group remains committed to the Egyptian LNG Project and will continue to negotiate with the Egyptian authorities and other stakeholders to seek a long term solution”.

BG Group’s share of operating profit from liquefaction activities in the fourth quarter of 2013 decreased 38% to $58 million, primarily as a result of a change in the tolling fee arrangements at Egyptian LNG.

Upstream and LNG activities in Egypt accounted for 18% of the Group’s production and around 14% of earnings from continuing operations in 2013. The book value of BG Group’s investment in Egypt, including receivables, represents around 8% of the Group’s net assets after impairment. Egypt delivered 40.3MMBOE of crude oil and gas to BG in 2013, the largest volume from any country. This was a lower figure from the 48MMBOE the company produced in the country in 2012. Production from UK, which is BG’s second largest producer, moved up to 36.5MMBOE in 2013, from 35.2MMBOE in 2012.

The story is not entirely gloomy. The Egyptian Government, afterall, paid the company some of its debt. “The position on domestic receivables improved with the receipt of some direct cash payments and, as a result, the year end receivable balance reduced to $1.2 billion”, the statement says. Again, BG, in December 2013, encountered gas pay at a number of target horizons in the Notus well. Evaluation of these results is ongoing.