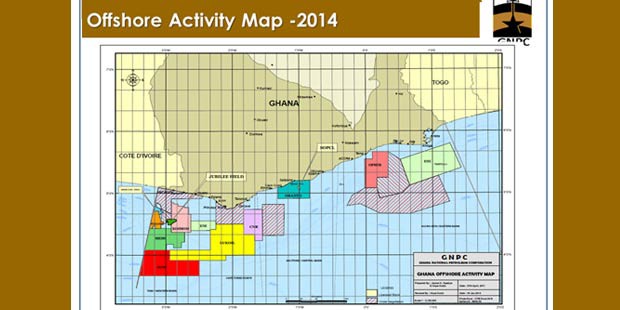 The country doesn’t conduct bid rounds, here’s what it does..
By John Ankromah

The Parliament of the Republic of Ghana has, in the last two months, ratified two petroleum agreements. One is for South Deepwater Tano Basin; the other, for East Cape Three Points Block. Both lie mainly in deep-water. AGM Petroleum Ghana Limited and Cola Natural Resources, each lead a group of participating companies with the exclusive right to carry out all petroleum exploration, development and production activities within the respective blocks.

Ghanaian authorities say that four other acreages are in various stages of negotiation.  AGM’s 3,470-square kilometre South Deepwater Tano Block is located in the deep to ultra-deep water part of the Tano basin in water depth ranging from 2,000 metres to 3,500 metres. It is in close proximity to the Hess-operated Deepwater Tano/Cape Three Points block, where seven discoveries have been made, and the Vanco/Lukoil-held Deepwater Cape Three Points block, which contains a discovery.

Ghana doesn’t conduct bid rounds. The process of obtaining a license to operate an acreage in Ghana lies squarely in engagement with the Ministry of Energy and Power (MOEP) and the Ghana National Petroleum Corporation (GNPC), the state hydrocarbon company. Now that a Petroleum Commission is now fully established as the regulator, the following process may change, but for now, this is it: The application process starts with an expression of interest to the MOEP and GNPC. Next is a review of Geological and Geophysical data at the GNPC, after which an application is submitted to the MOEP with a $10,000 application fee. The application is evaluated by both MOEP and GNPC. The latter makes a recommendation to the MOEP which then either declines, or invites the party/parties for negotiations. The negotiations board is constituted by the minister.