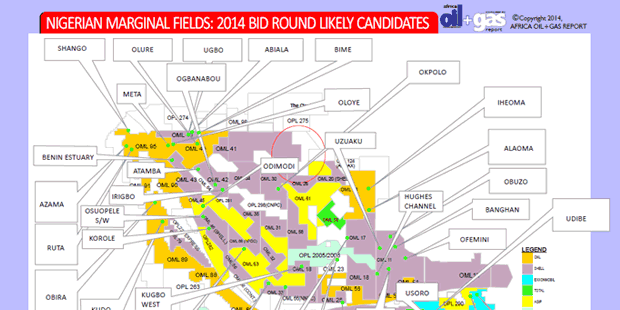 The delay around the Nigerian marginal bid round, announced with media fanfare in late November 2013, has led to speculation about the actual list of fields on offer. The country’s department of petroleum resources DPR, which is superintending the round, has not released any information regarding the process since the last of the three road shows publicising the sale took place in Abuja on December 12, 2013.

Newspaper reports quote George Osahon, director of the DPR, as saying that the list would soon be out.

As the list of fields meant for auction has not been published as promised two months after the initial announcement, several lists have been making the rounds, none of which is official.

The list published herewith, complete with a location map, is one of such lists. Like a dozen other odd lists in circulation, it includes fields that are no longer held by oil majors (even though such fields are listed under the major company that used to operate them). It contains 48 fields in total, of which nine (highlighted in yellow on the spreadsheet), have been part of the divestment proceedings by Multinational companies between 2011 and 2013. In other words, these fields have been sold by their owners to other companies in transactions that have largely been ratified by the Nigerian government.

Ugbo and Abiala are fields located in the Oil Mining Lease (OML) 40, a Shell operated asset until mid- 2012, which is now operated by the Nigerian Petroleum Development Company (NPDC) on behalf of the NPDC-Elcrest Joint Venture. Okpolo is located in OML 30, from which Shell, TOTAL and ENI divested their 45% equity in late 2012. Irigbo, Atamba and Ogbanabou are located in OML 42, which has ceased to be a Shell operated acreage and now licenced to the NPDC-Neconde Joint Venture.

Iheoma and Alaoma fields are located in OML 53, from which Chevron is in the final stages of divesting.  Okiori and Kugbo West are in OML 29, one of the four eastern onshore assets from which Shell, ENI and TOTAL are divesting.

The question is: Will the new “owners” allow them to be “resold?”

The Nigerian Marginal Field round is predicated on three main premises:

The fields are awarded only to Nigerian companies, so it’s a tool for boosting the Nigerian content, the government’s much vaunted policy of domiciliation.

It’s the only bid round in the world predicated on the strength of technical argument and not on the price indicated by some highest bidder.

It derives legitimacy from the idea that the discoveries may never get to production because the majors, on whose operated acreages the fields lie, consider their reserves uneconomic.

Two of these three premises have already been fulfilled by the new owners of those nine assets; they are small homegrown companies for whom those assets are more crucial than they were to the majors who operated them in the past.

It should have been easy to say that this point, plus the fact that most of the lists are much longer than the 31 that the government claimed while announcing the bid round last November, render these documents bogus, but some of those we interviewed would have none of that. Some argue that if a licence was meant to expire in two years’ time, and a field on the licence had been discovered as far back as 40 years ago and is still not developed, it is still a marginal field, regardless of who is holding it.

While the speculation goes on, companies are going ahead, putting up templates for the Prequalification Exercise. Whenever the list is announced the following programme will be activated: