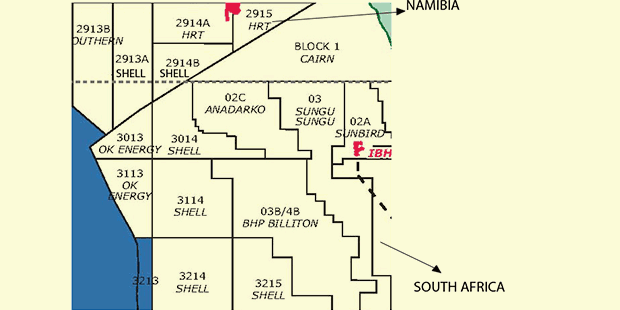 AngloDutch major explores virgin territories that could prove to be new heartlands, the way Nigeria was in the 1950s.
By Toyin Akinosho, Publisher

Shell’s return as an explorer in Namibia’s offshore is tied to its geoscience thinking about the prospectivity of South Africa’s deepwater Orange Basin, which straddles Namibia.

In 2002, the Anglo Dutch major walked away from the country’s only hydrocarbon discovery; the Kudu gas field, after its plans for a Floating LNG around the field collapsed on account of inadequate reserves volume.

The two Namibian blocks: 2913A and 2914B, which Shell took over from Signet Petroleum, are located directly north of three of the company’s South African acreages: Blocks 3014, 3114 and 3214. Shell is thus looking at a plunging, North South prospect straddling Namibia and South Africa.

It is instructive that this prospect lies south west of the Tullow operated Kudu gas field in Namibia and due west of Anadarko’s 02C in South Africa. Tullow Oil and Anadarko are, afterall, the two leading wildcatters in the African frontier.

Shell’s three South African acreages cover just over 37,000 square kilometres (37,000 km2) and are located approximately 150 kilometres to 350 kilometres offshore in water depths between 500 meters and 3,500 meters. The blocks’ southern edge is approximately in line with the town of Saldahna and the northern edge just south of Kleinzee. They border Namibian waters at their northern extent. So far, there has been limited exploration activity in the area. The company has undertaken a 3D seismic survey in an 8 000 km2 portion of the licence. Based on analysis of the seismic data, Shell is proposing to drill one or possibly two exploration wells in the northern portion of the licence area. It’s not inconceivable that the purchase of Namibian blocks 2913A and 2914B was made on the basis of a first look interpretation of the South African data.

Shell is looking for rank wildcat finds in Africa: virgin territories which could turn into new heartlands, the way Nigeria was in the late 50s. The company is the leading exploration campaigner for Shale gas in South Africa’s arid Karoo Basin. It is also examining the prospectivity of pre-salt layers in Angola’s deepwater Kwanza Basin.

Meanwhile, Namibia considers Shell’s return after 12 years as a godsend. “For Shell to decide to return means that they have a lot of confidence in finding oil in Namibia. It is also a boost for Namibia”, Immanuel Mulunga, the country’s petroleum commissioner, told AFP, the global newswire agency.