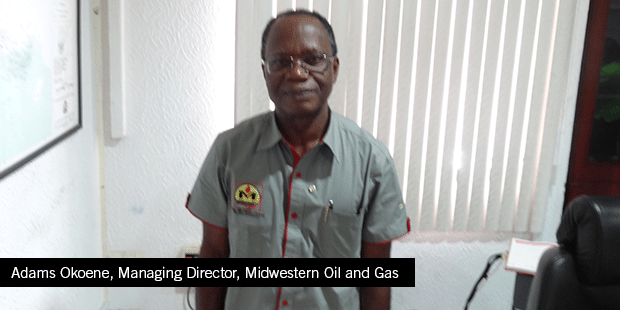 “The latest estimate of the cost is now about $70Million”
By Fred Akanni, in Lagos

The last lap of the 53km crude evacuation pipeline from Umusadege field to Shell’s Eriemu manifold is feeling its way through community challenges, even as the Umugini Asset Company Limited(UACL), the project’s operating company, keeps an eye on its proposed June 2014 commissioning date.

“I would like to deliver this project before June 2014”, says Adams Okoene, Managing Director of Midwestern Oil and Gas, the lead partner in the ownership of UACL, “but I am also a realist. All it takes is for one man and his son, supported by his community, to hold up a pipeline project for three days”.

Communities along the final, 26km stretch from Ozoro to Eriemu have been particularly demanding. Okoene would not confirm suggestions that they demanded that they take over most of the construction work from the staff of Oilserv, the project contractor, but he says “the Ozoro end of the pipeline route is particularly difficult”.

Construction of this lap of the project was expected to be the easiest because the right of way is an existing one; already acquired by the Nigeria Petroleum Development Company/First Hydrocarbon Company (NPDC/FHN) joint venture, but it has proven as tough to deliver as the earlier laps.

The irony is a pointer to where the problem lies.  Mr. Okoene admits that the communities are using the project to settle long standing scores with NPDC, now operator of the acreage through which this segment of the line transverses. NPDC took over operatorship of Oil Mining Lease (OML) 26, where the right of way lies, after Shell divested, in 2012. Communities have complained that NPDC has not adequately engaged them.

Completion of the 12” pipeline, with planned 45,000BOPD throughput, has been postponed several times, the last “date” being September 2013. Now, even June 2014 looks hazy. Project cost has shot up by over 33%, to $70Million. Okoene, a former engineering manager with Shell, the Anglo Dutch major, notes that “the agreement reached now” (with the communities), “should take us through, but with any pipeline project onshore Niger Delta, you never know”.

The project itself is a product of frustration. Four Nigerian companies who evacuate their crude through the export hub operated by Nigerian Agip Oil Company (NAOC) are unhappy about restrictions imposed on the volumes they can export. They are also increasingly worried about the formula with which the company assigns their share crude oil purportedly stolen from NAOC’s pipeline. These local minnows, including Energia Limited, Midwestern Oil and Gas, Pillar Oil and Platform Petroleum, all have the capacity to collectively produce over 32,000BOPD today, but NAOC will not take in more than 21,000BOPD. Midwestern Oil and Gas had gross production of 13,151BOPD, based on production days in January 2014, but the company has the capacity to produce over 21,000BOPD. Energia reportedly has 8,000BOPD capacity, but can only produce 3,500BOPD.