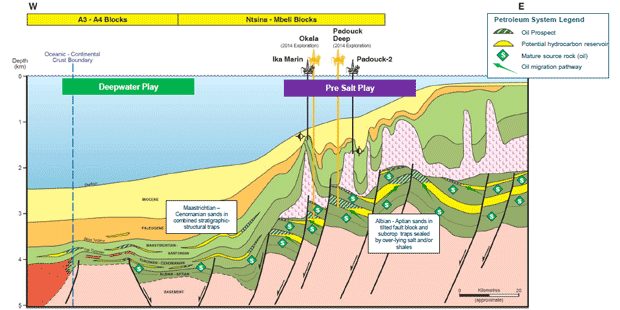 Ophir Energy has commenced drilling the first of two wells focused on pre Salt reservoirs in deepwater offshore Gabon. Padouk Deep 1 is also the first of three exploration wells in the country in 2014, of which the third is targeting a delta play.

The company is utilizing the Vantage Titanium Explorer drillship for all three wells.

Padouck Deep-1 located in the North Gabon basin although the company says that the play is regionally extensive elsewhere in Gabon and West Africa. “The prospect is estimated to contain Pmean recoverable resources of c.1.0bnbbls with significant follow-on potential”.

TOTAL operated Diaman #1B well, located in 1,729 meters of water, in South Gabon basin, was the first test of the Pre-salt in deepwater Gabon.- It encountered 50-55 metres of net hydrocarbons in the target formation. Ophir expects to find oil.