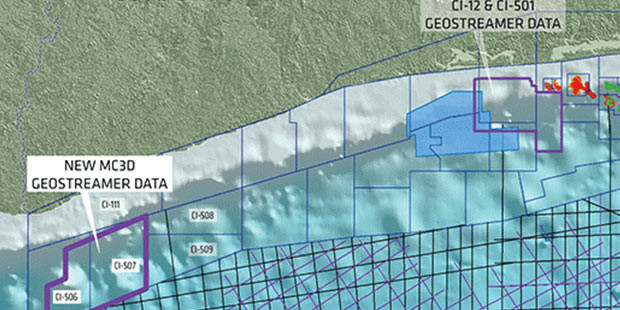 “Exploration offshore Côte d’Ivoire has historically focused in the East, where fields such as Lion, Panthere, and Baobab have proven a working petroleum system. However, as these fields mature, exploration is beginning to move West into analogous reservoirs in open acreage”, the company explains. “Oil industry interest in this area has also previously focused in shallower waters on the shelf, in both syn or post-rift structures. However, recent discoveries clearly show a trend towards deeper water and post-rift targets. New fields such as Jubilee (2007) and Paon (2012) have successfully demonstrated the greater opportunities in post-rift, Late Cretaceous turbidite fan systems in 2,000 m water depths”.

Acquisition of the CI-506 and CI-507 MultiClient 3D GeoStreamer survey is expected to be complete in Q2 2014 with the first datasets available in Q3 2014.