A new gas pricing methodology went into effect in South Africa on Wednesday March 26, 2014, following the expiry of parts of an agreement between the state and Sasol, the country’s largest natural gas importer. The old agreement had governed gas pricing since 2004, when Sasol commissioned an 865 kilometre gas pipeline transporting gas from Mozambican fields into South Africa. 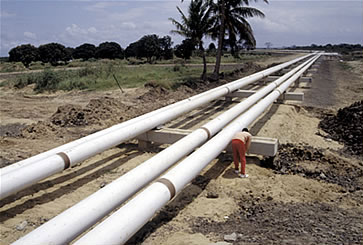 In 2012, Sasol imported 127 billion cubic feet of gas from Mozambique into South Africa. It meant 346Million cubic feet a day. It was also 76% of the country’s total consumption of 166bcf in that year. Sasol has built a supply network of around 2 500 kilometres to supply its 347 customers. With the country having little proven gas reserves, the company is essentially a gas supply monopoly. In mid-2013, Sasol  added a 156 kilometre pipeline to the Network Gas Pipeline around Johannesburg, the economic hub, and Pretoria, the political capital, to increase capacity and provide a backup supply to customers.

With the new regime, Sasol has now been subjected to price regulation for its piped gas. Sasol’s agreement with the governments of Mozambique and South Africa concerning the Mozambican gas pipeline has expired, forcing the synfuels giant into a pricing regime prescribed in the Gas Act of 2001, which stipulates that the National Energy Regulator of South Africa (Nersa) should shift from the market value pricing methodology that has prevailed hitherto to a nondiscriminatory pricing methodology.

Also, the licence limiting access to the company’s pipelines for other market players has become defunct. Now anyone, new entrants or existing gas importers, can pump gas into the pipelines if there is spare capacity.

Sasol had been exempted from regulated pricing for the past 10 years as the provisions of the agreement have prevailed over the Gas Act since 2004.

Nersa opted for the maximum-prices methodology, a decision based on a three year long public participation process. The regulator approved maximum Sasol Gas prices of $11/1000 standard cubic feet of gas (Mcf) on March 26, 2013, opening the way for the company to begin ‘actual price’ negotiations with its 347 customers.

In the meantime, some 17 large customers, forming a Gas Users Group, are in court, asking for judicial review against Nersa’s new methodology.

Their argument against the maximum-pricing methodology is that it is too favourable to Sasol Gas , they claim that the weighted basket used (which comprises coal, diesel, electricity, heavy fuel oil and liquid petroleum gas prices) is flawed in that it delinks the future prices of the key drivers of crude oil and producer inflation. The Users group, which comprises of some of South Africa’s leading companies, including South African Breweries and Mondi, the paper and packaging company, are uncomfortable with the price trajectory that the new methodology implies.