NPDC To Bring Odidi, Jones Creek, Back On Line 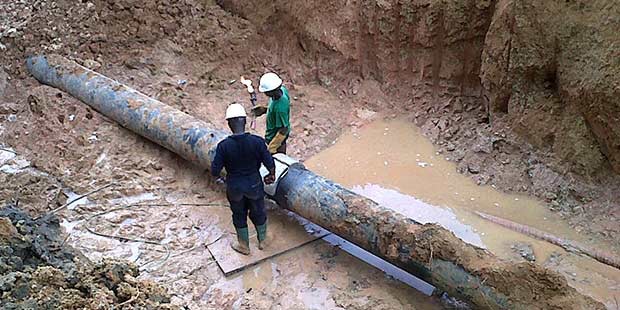 Fields were vandalized a decade ago, now being revamped
By Akpelu Paul Kelechi

Oil should start flowing from the Odidi and Jones Creek fields, in Nigeria’s Oil Mining Lease (OML) 42, in the western Niger Delta by mid- 2015.
For now, only the Batan field is producing in the lease, which was divested by Shell, TOTAL and ENI in 2012. Gross output was about 9,500BOPD, in early March 2014, field data shows.

Production infrastructure in the other fields, including Ajuju, Jones Creek and Odidi, were heavily vandalized in inter-ethnic clashes in the mid noughties. It’s one of the reasons Shell, the operator, along with its coventurers TOTAL and ENI decided to sell the asset. The combined 45% equity of the three companies was sold to Neconde, a Nigerian independent, for $585Million. Neconde’s net production in early March 2014 was about 4,300BOPD.

The re-vamping project has moved apace, claimed officials of the NPDC, the state hydrocarbon company now operator of the acreage, speaking on the sidelines of the Nigeria Oil and Gas Conference in Abuja.

NPDC has been criticized for tempering what could have been aggressive development of fields  by companies who bought the assets divested by  Shell and Co. For most of them, including Neconde, the output has been flat in the three years since they paid over $1.5Billion for these acreages. The prevailing argument is that NPDC operatorship put a damper on activity. But NPDC officials say that in the case of OML 42, things are going forward. “All the pipes that we require have been secured and they are in Nigeria right now and being coated. All the pipelines and flow lines required: tens of kilometres of line pipes and they are being coated. All the flow pumps required for the flow station have been procured and they are in country. In Odidi, the two gas turbines that are need have been procured since the last two years and the installation is going on as we speak. The re-entry process is going full steam. So by the first quarter of next year, our production profile will completely change from what it is now”, they say. NPDC is working to ensure that Odidi comes online by end of September 2014, “but if it slips, then it will be in fourth quarter”, the officials claim. “Jones Creek is also lined up to return on stream by December 2014, but if it slips, it will  come up by first quarter 2015”.