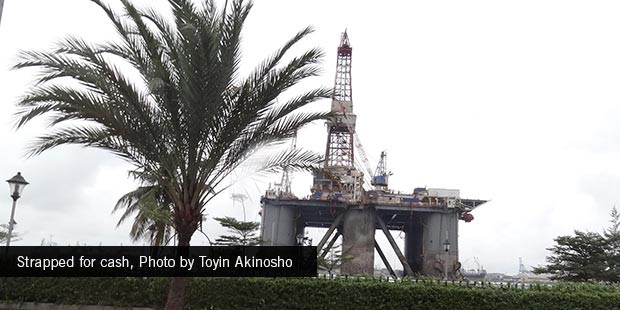 Conoil fingered by several service companies as a tough one to work for..
By Foluso Ogunsan

Nigerian rig contractors are concerned about the increasing turnaround time in payment for services they render to E&P companies. “A big challenge in our work is the balance sheet management payment factor”, says Sola Falodun, chairman of the Nigerian Chapter of the International Association of Drilling Contractors (IADC), the first and only African branch of that global body.

“Nigerians in the last five years have invested about $1.6 billion dollars in terms of investment in land rigs, swamp rigs and jack-ups; half of that amount has been spent on acquiring swamp rigs- that’s about $800 million. A lot of that capital was sourced from local banks”, Falodun says.

But return on that capital employed is turning out to be sub- optimal, in large part because of payment delays by both International Oil Companies, as well as indigenous oil companies who employ the services of these rigs. “The expectation is that when you provide a service to a client, you should get paid. Most contracts require that when you provide a service you get paid within 45 days, if it is a Day-to day contract or a PSD contract usually between 45-60 days. What has happened in the last four years is that we’ve seen challenges getting paid for services rendered. The actual payment period is set at 45 days and it sometimes extends to 120 days. So you look at the scenario, you take a look at finance and assets, you are paying interests, paying salaries, so if you have a four-month gap, you are going to be short in terms of meeting your financial obligations, so you then realize that you have huge receivables that you haven’t collected from your client”.

Falodun says that the standard explanation by the E&P companies ‘is that their JV partner has not approved payment’, “but the company that we sign the contract with is specifically is the IOC or an E&P company”, he remarks.

“So if an E&P Company is saying the JV partner has not paid, then it is discouraging, particularly when you look at all the efforts the Nigerian Content Development and Monitoring Board (NCDMB) has made in terms of empowering Nigerians, I must give credit to the Executive Secretary (Ernest Nwapa) for what he and his team have done post the law, it’s a humongous challenge they face, but they are taking it one step at a time. There are still a lot of loopholes, but what the NCDMB has focused on is specific areas of industry at a time and just deal with the issues. It’s discouraging when you invest in an asset and don’t get paid on time and then we complain but it is still a big problem”.

The IADC chairman says that “a lot of our members have this peculiar issue, so we also want to use the IADC Platform to engage the likes of DPR (the industry regulator), NAPIMS (the arm of the state hydrocarbon company which interfaces with the operating companies), to make them understand our plight, how can I improve my operating efficiency?”

Falodun is speaking on behalf of 11 drilling companies and six service companies of the IADC, but before the interview we had with him, several rig contractors had admitted to Africa Oil+Gas Report that they were being frustrated by lack of payment. The one E&P company most complained about, in private, was Conoil, the Nigerian independent. Conoil, as a rule, doesn’t talk to the press.Falodun would not mention names. Asked if he got the sense that some companies just don’t like paying, he defers the question and instead responds:  “What I think they do is “Cash-flow Management”. They tend to be creative with cash-flow. It is not good for us, all the efforts we’ve made in terms of engaging the E&P companies to understand that it’s a big problem for us has not yielded the results that we require. As I’m speaking to you, a lot of our members are still owed for 4-5 months”.

Falodun says that Multinational rig owners “can absorb it because they are big and the interests they pay on loans they get abroad are lower than what they get here. If you go to the bank to source for a dollar loan as a local company, you’ll be looking at 10%-15%, whereas the foreign company that is big may get that loan at 3%-4%. That’s a huge gap, so they can absorb it, but we can’t absorb it. So it’s not just their size, it’s also where they are coming from”. For Nigerian rig contractors to access funds offshore like the multinationals do, “they go through a very rigorous credit check because of the ‘Nigerian Factor’. We’ve had a number of Nigeria oil service investors’ access foreign funds; they go through a pain-staking effort to go through the process of getting those funds from foreign markets. Sometimes they succeed, sometimes they fail and what pushes them to go outside are the huge interest rates the companies are saddled with here”.