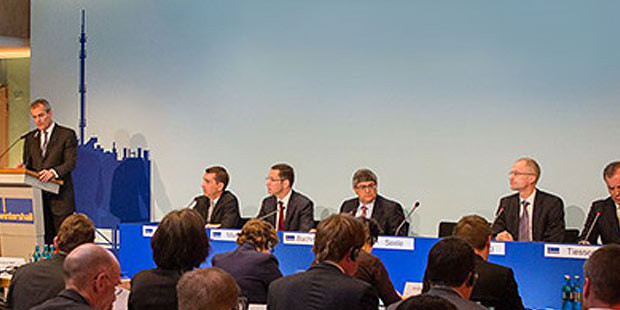 German independent Wintershall reported an increase in net income by close to 50% in 2013, despite the fact that it has not had production in Libya for close to half of the year.

“At 132 million barrels of oil equivalent (BOE), oil and gas production remained at the previous year’s high level despite the production stop in Libya”, the company remarks in a release. Newly acquired assets in Europe have clearly helped the bottom line. “The integration of the acquired shares in the Brage (32.7%), Gjoa (15%) and Vega (30%) fields from Statoil in Norway from August 2013 and the accelerated expansion of natural gas production in Russia increased production in these countries significantly and created the foundations for the good result in 2013”. These, the company reported, “compensated for the decreased oil production from the onshore fields in Libya, which was suspended in July 2013 because of strikes at the export terminals”.

Production in Libya before the 2011 revolution was up to 100,000 barrels of oil a day, though the company says there were always fluctuations as a result of infrastructure constraints as well as OPEC quota. The revolution put a halt to the output in February 2011, but Wintershall restarted production in October 2011.

At the end of 2012, daily production was stabilized at a level of around 85,000 barrels. Over the year it averaged around 83,000 barrels – much higher than planned. “Our oil production is always subject to a certain amount of fluctuation because it depends on the availability of the export infrastructure in the country,” explains Rainer Seele, Chairman of the Board of Executive Directors at Wintershall, Germany’s largest internationally active producer of crude oil and natural gas.“With an annual production of over 30 million barrels of oil (gross: 100%), the company ranked fifth in 2012 behind AGOCO and three Libyan-international joint ventures”, Wintershall’s spokespersons say.

Wintershall operates eight oil fields in Libya in the onshore concessions 96 and 97. Strikes at export terminals forced the company to suspend the entire crude oil and gas production in July 2013. The Al Jurf offshore oil field in Libya, in which Wintershall has an investment, was able to remain in normal operation all year. “At the moment it is unclear when the export blockade will be lifted. But we do expect to be able to resume onshore production in Libya,” the company says.

« The “DISCOVER THE DIFFERENCE“ Event Was a Success!!!
Seplat Starts Trading First Week In April »