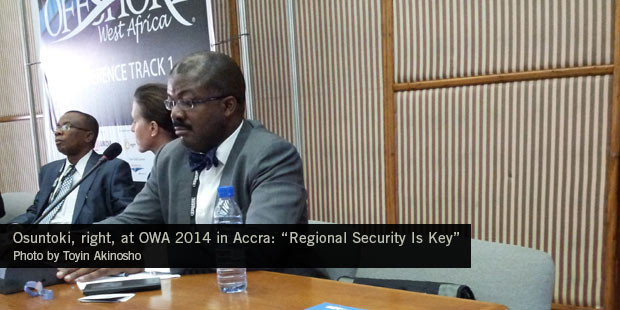 By John Ankromah, in Accra and Lagos

A regional management approach to localization of oilfield activity on the West African coast is far more beneficial than the current country-specific local content programmes being pursued by each of the several countries in the region.

“Duplication of assets will be avoided and waste will be reduced as exploration companies share assets”, says Akin Osuntoki, founder of an oil service firm focused on safety and security issues in the region. “There will be enhanced security through collaboration of all stakeholders”, he argues. “Cost of production will be reduced and there will be increased economies of scale”.

Osuntoki’s proposal for regional content was first made at the Offshore West Africa Conference in Accra last January. He re-stated the key bullet points at an energy forum in Nigeria recently. “Gulfof Guinea countries must press for dynamic cooperation between the Economic Community of African States (ECCAS) and the Economic Community of West African States (ECOWAS)”, he contends.

The “local content” idea has caught on like wildfire in Africa. Angola’s next bid round will focus mostly on indigenous companies. Ghana’s parliament has passed a local content law even though large scale oil production is less than four years old. Tanzania’s newly promulgated gas policy emphasizes a preference for domestic gas markets over export. But we have to “strategically map out the comparative advantages in each country to meet the extensive supply needs of the regional oil and gas industry”, says Osuntoki, whose company Richardson Oil and Gas, organizes an annual forum on Health, Safety and Security.

Osuntoki’s paper has especial focus on cooperation on maritime security. “The region is now increasingly identified as one of the world’s most poorly governed maritime stretches”, Osuntoki laments. “According to the International Maritime Bureau, IMB, the waters off the coast of Nigeria now rank as the second most dangerous in the world after Somalia’s. There’s illegal bunkering in the region and excess lifting of crude oil beyond licensed amounts continues”. Warning that these issues might escalate beyond Nigeria, Osuntoki calls for a Maritime Trade Information Sharing Centre (MTISC) to be set up in Ghana; an information collection and dissemination tool for the Gulf of Guinea, joint surveillance operations in the region. He wants governments to prioritise the fight against maritime crime by creating an inter-ministerial committee in each country to draw up a national maritime strategy to tackle the immediate threat and the root causes of the problem and sign bilateral agreements at the presidential level between direct neighbours to facilitate extraditions and enable close cooperation between navies, maritime administration agencies and police forces in counter piracy work.