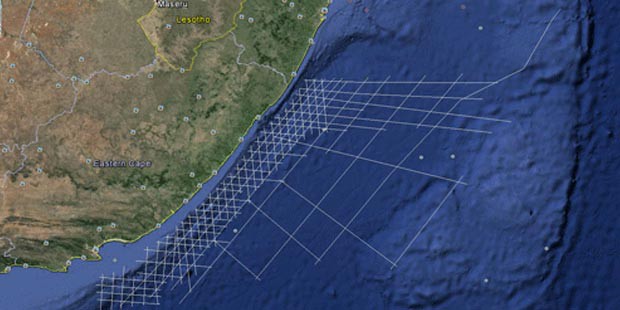 Petroleum Geo-Services (PGS) reports that its ongoing MultiClient two dimensional (2D) seismic survey off South Africa is ahead of schedule and has successfully surmounted the many challenges of the area”, including strong currents.  The acquisition is expected to be complete in the second quarter of 2014 with fully processed data available in fourth quarter 2014.

The 13,000 km GeoStreamer survey is covering a frontier area offshore East Coast South Africa.
The data is being acquired through an agreement with the Petroleum Agency of South Africa. The Norwegian firm says that 70% of the survey has been done.
“The data will give an approximate 20 km x 20 km grid of high-quality seismic over this frontier area and includes well-ties into the shallower waters in the south-west and north-east areas”, PGS says. “This is the first comprehensive data-set to be acquired over these blocks.

“The eastern coast of South Africa is a narrow passive margin that formed in Late Jurassic to Early Cretaceous times, during the breakup of Gondwana. A series of en-echelon rift basins, formed during the breakup along the southern coast and known as the Outeniqua Basin, contain several commercial oil and gas fields in Early Cretaceous sands. This basic structure and a working petroleum system are predicted to continue along the eastern coast, overlain by Cenozoic sediments”.

The plays expected along the East Coast of South Africa are very similar to those on the conjugate Falklands North and South Basins, where recent discoveries such as Sea Lion and Loligo have proved working petroleum systems. DSDP drilling in the 1970’s on the Maurice Ewing Bank, to the east of the Falklands, also proved the existence of Late Jurassic to Early Cretaceous oil quality source rocks.