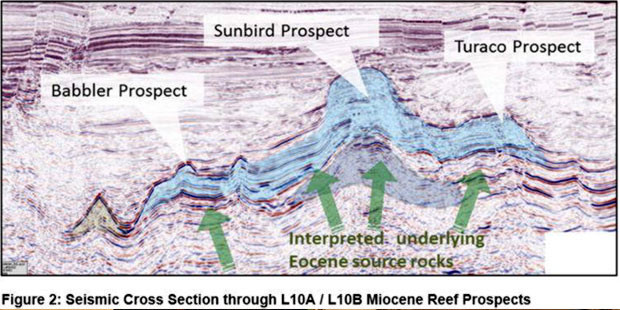 BG’s wildcat well Sunbird-1, off the coast of Kenya, was found to contain a hydrocarbon column in the primary target, a massive reef of Miocene age. However, extensive losses of drilling fluid into the reservoir restrained the UK independent from determining the hydrocarbon footage in the deep-water well, its first probe in L10A, an acreage in Kenya’s Lamu basin.

“The top of the Sunbird Miocene Pinnacle Reef was penetrated at 1,583.7 metres subsea”, according to  Pancontinental, the Australian minnow who is one of BG’s partners in the asset. “The vertical extent of the hydrocarbon column has not yet been determined due to the difficulty of assessing wireline logs in the upper section of the reef where there were extensive losses of drilling fluid into highly porous and permeable parts of the reservoir”, Pancontinental explained.

The Sunbird-1 well, using the drillship Deepsea Metro-1, reached a final depth of 2,850 metres below the drill floor. The water depth is 723 metres. “Hydrocarbon samples have been recovered for detailed analyses. The full nature of the hydrocarbons will not be known until geochemical and other analyses have been completed”.

Recent and current activities include wireline logging, formation and fluid sampling and preparations for completing the well. “It is intended that Sunbird-1 will be “plugged and abandoned” in accordance with the planned drilling programme and industry best practice, meaning that the well will be made safe in such a way that it can be left permanently without further intervention. In 2011, BG Group signed Production Sharing Contracts with the government of Kenya for two offshore exploration blocks – L10A and L10B. BG Group is operator on both blocks and holds a 40% equity interest in block L10A (Cove Energy 25%, Premier Oil 20%, Pancontinental 15%) and a 45% interest in block L10B (Premier Oil 25%, Cove Energy 15%, Pancontinental 15%).

2D and 3D seismic data acquisition were carried out during 2012 and 2013. The well was drilled on the basis of modern 3D seismic data. Blocks L10A and L10B together cover an area of more than 10 400 square kilometres in the southern portion of the Lamu basin located in water depths ranging from around 200 metres to in excess of 1,900 metres.

« Ophir’s First Pre-Salt Well In Gabon Is A Failure
Nigerian Deepwater Success Is On the Wane, PIB Or Not »