Spaniards Spud A Well In The Precambrian 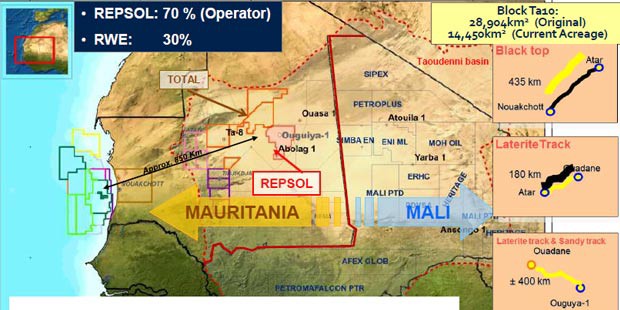 The well is being drilled in rocks of Precambrian age, the oldest epoch in geologic history. It is the period of time that extends from about 4.6 billion years ago (the point at which Earth began to form) to the beginning of the Cambrian Period, 542 million years ago..

Ouguiya-1, located in the desert of the North African country, is intended to provide information about the hydrocarbon potential of the licence area.
The well is being drilled using the Saipem 5893 drilling rig. Its primary targets are Precambrian formations. The well is scheduled to be completed within the second quarter of 2014.

Repsol holds 70% in the acreage, with  its partner the German independent RWE Dea, holding the remaining 30%.
“We are very pleased that together with our partner, we have commenced this well, which is both challenging from an engineering point as well as being of great interest in geological terms,” explained Werner Schwarzhans, RWE Dea’s  Senior Vice President for exploration. “Prospects of such an early Precambrian age have rarely been explored to date.”. The Precambrian represents more than 80 percent of the total geologic record, yet it is rare to find oil in such formations.
The well is being drilled on the interpretation of “modern two dimensional (2D) seismic data acquired during the years 2008 to 2010” the partners explain. “These new data were interpreted in combination with re-processed older 2D seismic data”.
Block Ta10, is located in the poorly explored Taoudeni Basin in the desert of central Mauritania, some 800 kilometres inland from the Atlantic coast. The licence area covers 14,450 square kilometres.

« Apache Reached Close To 20,000 Feet Deep In Egypt’s Western Desert
Morocco: Another One Bites The Dust »