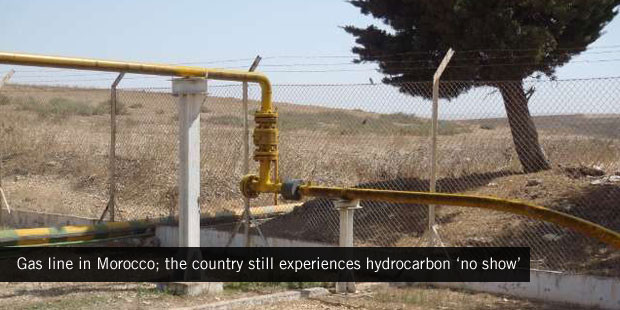 Exploration companies banked so much on Morocco that they drilled three wells in the country between late 2013 and mid-March 2014. The fourth is currently underway. It’s an unusually high drilling activity for North Africa’s least explored country. The results have been suboptimal.

In East Africa, results of new wells finalized in 2014 have been less promising than they were in early 2013. Tullow’s first operational update onshore Kenya in 2014 indicates a less than stellar exploration performance.

Ophir’s two frontier wells in the continent’s deepwater in the last six months have both come up dry.

The best of Morocco’s three wells has been Cairn Energy’s JM-1, spud in January 2014, reaching a total depth of 3,711m TVDSS and plugged and abandoned without testing. Cairn has revised its earlier update, claiming the well “confirmed the presence of heavy oil over a 110 metre  gross interval in the upper jurassic”. This correlates with a sequence of the same age “tested in the 1968 MO-2 well, located two kilometres from JM-1”. The company however cautions that the reservoir quality and oil gravity at this level require further evaluation. In the Middle Jurassic, JM-1’s other targeted objective, there was limited primary porosity. Evaluation of well logs and side wall cores continues.

Before JM-1, Cairn had plugged and abandoned the FD-1 exploration well, located in 1,500 metres (m) of water in the Foum Draa block for lack of a commercial sized pool. Canadian minnow, Longreach Oil and Gas, encountered only gas shows in the wildcat Koba-1, in its operated licence area onshore Essaouira Basin.

Ophir Energy drilled a wildcat each in deepwater East and West Africa between October 2013 and March 2014. Mlinzi Mbali-1 and Padouck Deep-1 respectively failed to deliver. The targets in Mlinzi Mbali-1, a structural crest within a Lower Cretaceous channel complex, in Block 7, Tanzania, were found to be water bearing. Ophir’s disappointment was mitigated by fact that the probe was the deepest stratigraphic test offshore Tanzania and will provide crucial information “that will be integrated into our interpretation of the potential of Block 7 and the wider deepwater basins of Tanzania”.

There is justification too for the failure in Padouck Deep -1 off Gabon. “There were no significant hydrocarbon shows in the targeted reservoirs”, but “minor shows were interpreted at shallower intervals providing evidence of a working hydrocarbon system in the offshore North Gabon Basin. In addition, well log responses in the deeper pre-salt stratigraphy are similar to those observed onshore Gabon where they are indicative of an interbedded pre-salt source and reservoir system”.

Meanwhile, BG is still trying to make sense of the results of its first probe in Block L10A deepwater Lamu Basin, offshore Kenya. The UK independent insists it encountered a hydrocarbon column in the prognosed reservoir in Sunbird-1, but “extensive losses of drilling fluid into the reservoir” restrained the UK independent from determining the hydrocarbon footage in the well”.

In Kenya’s more prospective onshore terrain, which has seen a string of successes, Tullow operated  Emong-1 exploration well in Block 13T encountered poorly developed oil bearing reservoir sands. The well was drilled to test a structure directly across the main basin bounding fault, which is juxtaposed against the material oil accumulation discovered by the Ngamia-1 well, approximately four kilometres to the southeast. Tullow is unfailingly optimistic. “The result suggests that the main basin bounding fault controls the distribution of reservoirs in this area and has no impact on the potential of the Ngamia oil accumulation”, the company says.  In Etuko-1, which was heralded as a discovery in late 2013, drill stem test came up with a trickle: 550 BOEPD. The PR Marriott rig drilled Etuko-2 to a final depth of 650 metres and the well flowed water with oil shows. The best DST figure that Tullow reports in its update was that of Ekales-1 oil discovery well in Block 13T which flowed “over 1,000 barrels of oil per day”.  The company sounds upbeat, but 1,000BOPD has never been a petroleum geologist’s idea of an amazing DST result.

Tullow operates Blocks 10BB and 13T with 50% equity and is partnered by Africa Oil Corporation, also with 50%.

The first quarter of 2014 hasn’t entirely been all about failed wells in the African frontier. Cobalt Energy has reported results of two rank wildcats in deepwater Kwanza Basin between January 15 and  February 28, 2014. “Bicuar 1A was drilled to a measured depth of 5,739 m and encountered 56 m of net pay from multiple presalt intervals”. Of the second well, the company  reports that initial analysis indicates that the Orca structure in deepwater Angola, tested by Orca-1, “has a resource potential of between 400 – 700 MMBO”. The company claims:“Results of an extensive logging, coring, and fluid acquisition programme confirmed the existence of a large light oil reservoir and a thin condensate and gas cap in the upper sag section of the well. In addition, mobile oil was discovered in the deeper syn-rift section of the well”. BP, a partner in Block 20, describes Orca as “a potentially commercial discovery”.