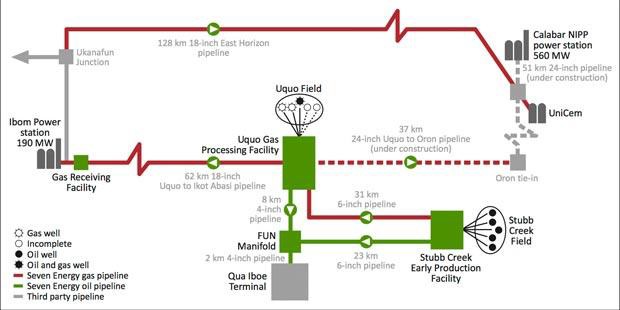 “The investments will be in two tranches, the timing of which is subject to the satisfaction of certain conditions in the investment agreements”, the company says in a release.  “The institutions are investing in Seven Energy’s irredeemable convertible loan notes which bear no coupon and are akin to equity capital.  On a converted and fully diluted basis, on full satisfaction of the investment agreements, the new investors would account for approximately 26% of the equity capital of the Group”.

Temasek is one of the biggest fund managers in the world, owning and managing a net portfolio of $173Billion as of March 2013. This is the second investment the company would be involved in, regarding African gas resources, in the last three months. In February 2014, Pavilion Energy, a Temasek subsidiary, paid $1.255Billion to London listed minnow, Ophir Energy for 20% equity in three blocks offshore Tanzania.

“These investments are a vote of confidence in Nigeria and in Seven Energy’s vision to be the leading supplier of gas in the country.”, says Phillip Ihenacho, Seven Energy’s Chief Executive Officer.

The investments will enable Seven Energy to further develop gas supply opportunities in Nigeria’s domestic energy market, the company explains. “This new equity capital will assist Seven Energy in the development of its growing portfolio of assets in Nigeria, where the Group is focusing on the development of upstream reserves and resources and gas infrastructure to provide gas to the domestic market for power generation and industrial consumption.

“Through its gas processing, distribution and marketing subsidiary, Accugas Limited (“Accugas”), and its recent acquisition of the East Horizon pipeline, the Group has to date invested approximately US$1 billion in south-eastern Nigeria.  This reinforces the Group’s position as a leading integrated gas company in Nigeria.  The Group aims to capture the growing demand for gas and power as Nigeria’s industrial base grows and the liberalisation of the power sector spurs further investment in generating capacity”.

Seven Energy says it has long-term take-or-pay gas sales agreements in place to sell over 1.4 trillion cubic feet of gas.  “A 10 year contract to supply 43.5 million cubic feet of gas per day (“MMcf/d”) to Ibom Power; a 20 year contract to supply 131 MMcf/d to the federally-owned power plant at Calabar; and a 20 year contract to supply 25 MMcf/d to a cement plant in the Calabar area, increasing to 50 MMcf/d upon the anticipated expansion of the plant”, the company remarks. “The two power stations, which will have a combined installed capacity of approximately 750 MW when fully commissioned, will add an additional 20% of capacity to Nigeria’s current operating electricity generation capacity”.

It says that in collaboration with its customers and other stakeholders, “Seven Energy is working to link its infrastructure together to establish a 300 km gas ring of 24-inch and 18-inch high pressure pipelines in Akwa Ibom and Cross Rivers states with total distribution capacity of 600 MMcf/d, capable of supplying the demand centres of Calabar, Uyo and Ikot Abasi, and giving access to Port Harcourt to the west.  In addition, at Ekid, near the ExxonMobil Qua Ibo terminal, the Group owns a gas plant for treating and processing 200 MMcf/d of gas which is currently supplied from the Uquo Field where the Group is the 100% funding partner.

“With this significant capacity built into its processing and distribution infrastructure, the Group is well-positioned to provide long-term gas supply for power generation as well as lower-cost fuel to local industries.  The Group is currently in active discussions with a number of current, planned and potential off-takers with regards to future gas supply agreements.

“The relative lack of investment in gas development for the domestic economy has resulted in most Nigerian industry and power generation relying heavily on imported diesel and fuel oil, which are significantly more expensive than locally-sourced natural gas”.