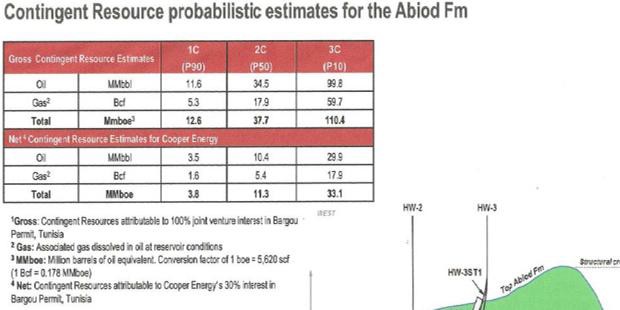 Contingent resource of main asset estimated to be 11.3Million BOE
By Mohammed Jetutu

Cooper Energy is looking to exit Tunisia, its only African portfolio, and has set up a data room for would be buyers.

“At present a number of interested parties are reviewing the opportunity and the data room process is anticipated to remain open during most of the June quarter of 2014”, the company says. In the absence of a compelling offer, Cooper Energy considers that “the greatest value will be realised through a sale after the drilling and production testing of the planned Hammamet West-3 ST-2”

Cooper, an Australian minor, operates three permits in Tunisia: The Bargou Permit (Cooper Energy 30% and Operator) is located offshore Tunisia, the Hammamet Permit (35% operatorship) and the Nabeul Permit (85% operatorship). In the last quarter the company focused on securing a rig to re-enter Hammamet West-3 and drill and test a second sidetrack well, Hammamet West ST-2. “It is expected that operations at Hammamet West-3 will re-commence in early 2015, subject to rig availability and government regulatory approvals”, Cooper explains. “The objective of the second sidetrack well is to confirm oil productivity from the naturally fractured Abiod Formation, through drilling and testing a highly deviated wellbore. The second sidetrack is being drilled after production testing of Hammamet West-3 ST-1 could not be completed due to recurrent blockages of the production test equipment”

Cooper Energy has assessed its net 2C Contingent Resource in the Abiod Formation of the Hammamet West Field to be 11.3 million BOE, having considered the results of an independent assessment by Senergy, a global integrated energy services company. The company insists it is not aware of any new information or data that materially affects the information included in the Announcement and that all the material assumptions and technical parameters underpinning the estimates in the Announcement continue to apply and have not materially changed.

“The assessment has reinforced confidence in the likelihood of the commercial development of the Hammamet West field. The gross 1C Contingent Resource assessed for the field of 11.6 MMbbl of oil exceeds the threshold of 8 to 10 MMbbl reserves of oil that Cooper Energy’s calculations indicate is required for the field to be considered economic. The drilling and production testing of the second sidetrack on Hammamet West-3 is expected to provide key information for further assessment of the resource base and development options. “Geological studies continue in the Hammamet Permit (Cooper Energy 35%) and Nabeul Permit (Cooper Energy 85%)”, the company states.