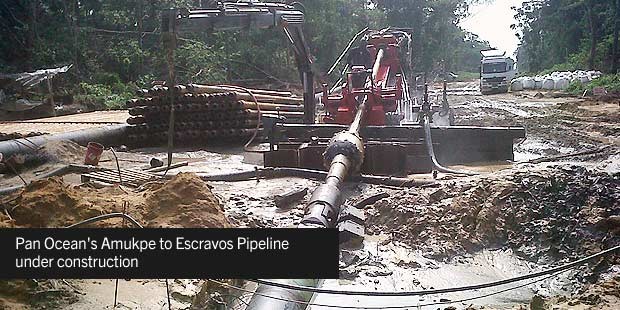 The Nigerian independent, Pan Ocean, is the winner of the bid for the Shell operated Oil Mining Lease (OML) 24, one of the four onshore acreages in Eastern Nigeria that Shell, ENI and TOTAL are currently divesting from.

It wasn’t clear, last night, what Pan Ocean has agreed to pay, but the divesting partners put a value of between $500MM and $1Billion on each of OMLs 18, 24 and 25. OML 24 currently delivers 25,000BOPD from three fields and outputs 8MMscf/d of gas.

OML 29, the priciest of the assets, is valued by the partners at over $1.5Billion. Shell, ENI and TOTAL, all European majors, are selling their 45% ownership of the acreages.

Pan Ocean has been keen on acquiring a producing asset. It currently produces 7,500BOPD from its OML 98 and is working on field development in Oil Prospecting Lease (OPL) 275.

It is also constructing a 67 kilometre oil evacuation pipeline, as an alternative to  the troubled Shell operated pipeline through which it currently exports its crude,  as well as the second phase of a gas gathering and processing plant. “This is the shot in the arm for this company”, says Sam Ajibua, an Africa oil M&A analyst based in Johannesburg.

In the yearlong course of the bid process, over 100 companies and consortia were involved in the running to buy out the majors in these four producing acreages. The final submission of bids took place on February 18, 2014.  This current sale is the third of a series of sale of the partners’ stakes in assets located onshore Niger Delta. Shell and Co have sold equities in eight acreages for a total cash haul of $2.72 Billion between 2010 and 2013.

Shell officials have said it would take another year for the entire process to come to closure. It typically takes the Nigerian Ministry of Petroleum Resources over one year to sign off on the approval.

The process of divestment of these four acreages goes back to June 2013, when Shell discretely intimated some Nigerian indigenous companies of its plans to divest from several unnamed Eastern Nigerian onshore licences. In no time, the list of bidders, which initially included such ‘usual suspects’ as Sapetro, ND Western, and Seplat, had ballooned to 100. “There were so many consortia of all sorts”, joked. Three months later, when the Anglo Dutch major named the acreages, industry’s attention was focused on the ongoing sale of Chevron’s stakes in three onshore assets in the same neighbourhood. Chevron wrapped up the divestment from OMLs 52, 53 and 55, in early November, with the winning bids going to Seplat, Amni, and Belema Limited.

« Cooper Hopes To ‘Offload’ Tunisian Portfolio
Seplat: Why we Lost The Shell Bid »