Umugini Will Be Commissioned In May 2014 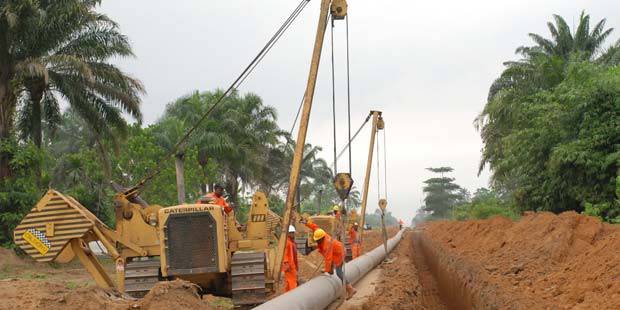 By Toyin Akinosho, Publisher
There is now a clear line of sight to completion of the Umugini Pipeline, the evacuation route for four Nigerian marginal field producers in the western Niger Delta. The 51km pipeline “will be commissioned in May 2014”, according to Emeka Obi, Chief Executive of Oilserv, the contractor handling the project.

Completion of the 12” pipeline, with planned 45,000BOPD throughput, had been postponed several times since early 2013. Project cost has shot up by over 33%, to $70Million. The key challenge has been community demands along the pipeline right of way.

The pipeline is being constructed as an alternate route to a 48km line to Agip’s export hub in Kwale where the Italian major applies strict restraints to intake.  The four operating companies (Midwestern, Energia, Pillar and Platform) evacuating crude through Kwale claim they have capacity to collectively deliver over 32,000BOPD through the facility but Agip would only allow 22,000BOPD. “We have over 6,000BOPD locked behind pipe”, Midwestern has consistently lamented. The Umugini pipeline runs from the Umusadege field  in Oil Prospecting Lease (OPL) 283/C, south to the Ogini flow station in the Oil Mining Lease (OML) 26 and then east to Shell’s Eriemu flow station. The line will connect Midwestern Oil and Gas’ Umusadege and Energia operated Ebendo fields to the Trans Forcados export pipeline. These two companies will switch from the Kwale hub to this route, whereas Platform Petroleum and Pillar Oil consider the new route as an alternative for their Egbeoma and Umuseti fields. The Trans Forcados export pipeline will deliver crude oil from Umusadege and Ebendo fields to the Forcados export terminal operated by Shell. The challenge with this route is that the Trans Forcados export line is itself consistently under attack by vandals.

Oilserv says that the project’s challenges are not only community issues. It had “a window of 4months of clement weather for full construction activities to take place without deploying specialized equipment to mitigate under water challenges that are peculiar with the Right of Way”, the company explains. “We however evolved appropriate strategy to overcome this challenge and are close to meeting the project objectives and delivery of the pipeline. Umugini pipeline will be commissioned in May 2014”.

« Sasol Looks To 2,000BOPD Production In Mozambique
Why should I attend the Offshore Technology Conference(OTC) in Houston? »